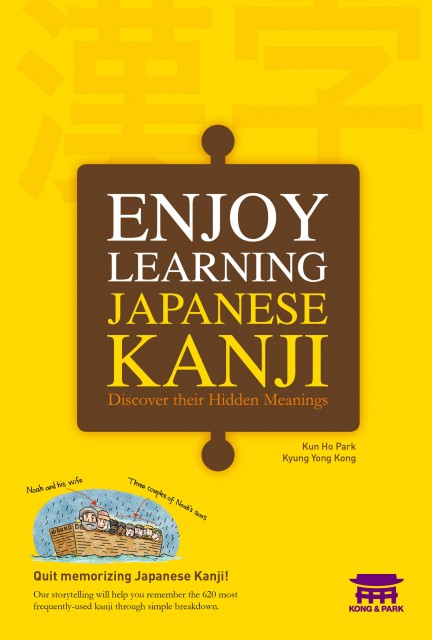 AUTHOR : Kun Ho Park , Kyung Yong Kong
ISBN : 9781635190007
PUBLISHER : KONG & PARK
PUBLICATION DATE : February 28 ,2017,
SPINE SIZE : 0.10 inches
PAGES : 416
SIZE : 5.10 * 8.9 inches
WEIGHT : 1.6 pounds
CATON QTY : 20
PRICE : $29.95
Japanese kanji are represented as pictograms which are based on the shape of objects. If you feel even slightly disheartened that you will have to memorize each one of them, then do not worry. Just as the English language learning system is based on alphabets (A, B, C, etc.) which are a set of characters that represent the phonemic structure of the language; similarly, Kanji learning has about 250 basic and radical characters. Remember that you can combine these kanji or break them in order to easily read, write and understand them.

How must one learn the basic characters?
This book is written to help you understand the origin and usage of each character. Now you can recall instead of memorize. To remember means to strengthen the synapses which connect your brain cells. Synapses can be strengthened by stimulating the five senses - smell, hearing, taste, vision and touch. When multiple senses are used together, the memory lasts longer. Better results can be achieved when such stimuli is coupled by unforced repetition. One good way of strengthening the synapses is to repeat the same stimulation. This book expands on the basic character by adding parts that give new meaning in a radical form. This means you are exposed to the same basic character multiple times.

Learning that can be used immediately
By learning how these kanji came to be, you can also learn how adding a certain component changes the meaning. For example, the character "色 [しょく·しき]" meaning ‘color’ depicts a person(⺈) on top of another person(巴) in the act of sexual intercourse, which causes one to flush in excitement. Once you know that origin, you will be able to understand why "色" also means ‘lust.’

The co-author of this book is KONG, Kyung-Yong. Although he was born in Korea, he is the 78th descendent of Confucius, and due to his family, he was familiar with Chinese characters since youth. He was a bookworm who perused over the Britannica Encyclopedia when he was just a boy. He conceived of writing a book with the idea that Chinese characters with form and sound can be easily learned if meanings are given to the sounds. His experience reading encyclopedias and countless books helped him assign scientific or social meanings to the sounds. He is a professional publisher active in the publication field, participating in diverse activities such as writing, editing, and consulting governmental agencies or universities.
Introduction 06
User Guide 08