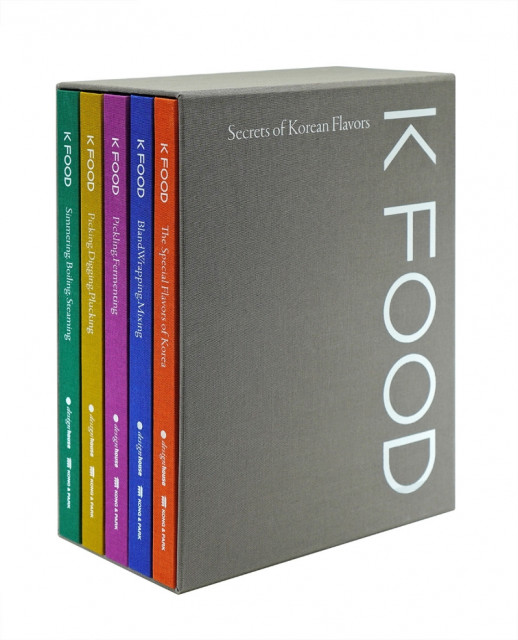 AUTHOR : A House Full of Happiness Editorial Department
ISBN : 9781635190373
PUBLISHER : KONG & PARK USA, INC.
PUBLICATION DATE : September 30 ,2021,
SPINE SIZE : 4.5 inches
PAGES : 1128
SIZE : 7.8 * 9.7 inches
WEIGHT : 9.10 pounds
CATON QTY : 6
PRICE : $199.50
“There's never been a Korean food book like this before”
As the first Minister of Culture, Lee O-young, states, people who say 'eat age' (which means getting older), 'eat money' (that is, earning it), 'eat insults' (being bad-mouthed), 'eat hardship' (exerting yourself), 'eat fear' (getting scared), ‘eat your mind' (making up one’s mind), 'eat a championship' (winning one), and 'eat feelings' (when one is really touched) are Koreans. In dealing with food, time, space, emotions, and goods, Koreans have been inseparable from the activity of eating. However, there were not many books that explored the way they ate and lived. Above all, it is rare to find a book that properly answers the question of people outside the country, 'What are the characteristics of Korean food?'

'K FOOD: Secrets of Korean Flavors' is the result of an effort to examine the spirit and substance, and the past and the present, that has taken root in the Korean table, with a dense and bold eye. Above all, this book looks at Korean food in terms of cultural codes such, as 'flavorlessness,' 'fusion,' 'fermentation,' 'gathering,' and 'moist-heat' instead of traditional standards, such as 'season' and 'ingredients.' Korean food begins with a bland and mild ‘tasteless’ rice, and that rice is wrapped up in a ssam or mixed with meat and vegetable ingredients, sesame oil, and red pepper paste for ‘fusion’ properties, which are the first and second codes. While the Western cooking code consists of the confrontation between cooked and raw, and meat diet and vegetarianism, the third code examines the taste of fermented Korean food, that is, Korean food through ‘fermentation.’ The fourth code, ‘namul culture,’ looks into Korean food through the tradition of the ‘gathering era’ of digging for namul (greens), picking tree fruits, and plucking marine plants. The fifth code, ‘wet culture’, focuses on foods that are always included in Koreans' meals. They are broth-based foods such as soup, tang, stew, and hot pot, foods that need to be simmered, such as yeot (Korean taffy), grain syrup, and syrup, and foods cooked with steam, such as rice cakes and other steamed foods. Former Minister of Culture Lee O-young, “Korea’s best scholar,” took on the task of coding through this insight into the spirit and matter, and the past and the present of Korean food. Han Bokryeo, the director of the Institute of Korean Royal Cuisine, Chung Haekyung, Professor in the Department of Food and Nutrition at Hoseo University, Park Chaelin, Ph.D. at the World Institute of Kimchi, and Cha Gyunghee, Professor of Korean Cuisine at Jeonju University, were responsible for the task of specifying and presenting the code in detail across each volume.
The two-year-long journey bundled into five volumes originated from the idea that food, especially Korean food, is not just a material substance that fills the stomach but somewhat of a 'media' with strong communication powers. This is the result of a comprehensive examination from the roots of Korean food such as royal cuisine, temple food, and Jongga food, to the scenery of the dining table where Koreans live in 2021, and from the source of ingredients to producers, from representative local foods to popular products on the market.
Korean food, which is prepared by mixing, fermenting, seasoning, and boiling, harmonizes with the principles of circulation and paradox. They do not ‘exclude’ but ‘include,’ and embrace and harmonize with each other. It not only adheres to the memories of the past or the taste of tradition, but also fuses and develops with the present taste and foreign culture, and as this book struggled to find this, it would be very reasonable to name this book ‘K-food,’ like ‘K-pop,’ ‘K-drama,’ and ‘K-beauty.’

'K FOOD: Secrets of Korean Flavors: Part 2, Bland, Wrapping, Mixing'
The basic composition of Korean food is rice, to the extent that all food except rice is considered a side dish to accompany rice. The bland and mild rice differentiates the taste of all kinds of side dishes and fuses them simultaneously. We explored the secrets of fusion culture, such as 'ssambap' and 'gimbap,' where you put together all kinds of ingredients and put them in your mouth, and 'bibimbap,' which is eaten by mixing various ingredients. It also includes recipes of everyday dishes that are eaten wrapped and mixed.

'K FOOD: Secrets of Korean Flavors: Part 3, Pickling, Fermenting'
Like kimchi and sauces, the characteristic of Korean food is the taste of fermented food, neither raw nor cooked. We looked at ingredients for making soybean paste, soy sauce, red pepper paste, kimchi, fermented liquor, etc., and explored tools necessary for fermentation, such as earthenware and jangdokdae, a platform for traditional earthen jars. It also includes recipes for fermented foods that Koreans enjoy in their daily life.

'K FOOD: Secrets of Korean Flavors: Part 4, Pickling, Digging, Plucking'
Koreans dig up, pick, and pluck almost all parts of plants, like mountain herbs, wild vegetables, and garden vegetables, to make them a meal. The culture of enjoying marine plants such as seaweed and laver, and the culture of collecting and enjoying root plants and tree fruits are also old traditions. It examines the gathering culture of Koreans, which can be called the 'namul nation,' and includes everyday recipes.

'K FOOD: Secrets of Korean Flavors: Part 5, Simmering, Boiling, Steaming'
One of the most important codes for interpreting Korean food is the "wet culture," a mixed system of eating solid ingredients and broth together. Soup food represented by broth, such as soup, stew, and hotpot, and noodles, such as noodle soup and ramen, and foods that steam for a long time, such as rice cake and steamed foods were examined.

Founded in 1987, the monthly magazine
A cookbook co-created by the ‘Korean Food Avengers’
'K FOOD: Secrets of Korean Flavors' consists of the ‘Food Humanities’ section at the beginning of each book which unravels Korean food by code. At the back of each volume, according to the code, there are ‘everyday Korean recipes’ that Koreans enjoy these days. A total of 158 recipes were recorded in detail, from the selection of ingredients to recipes: 33 everyday Korean food made by wrapping and mixing, 54 recipes of everyday Korean food made by pickling and fermenting, 36 recipes of everyday Korean food prepared by digging, pickling and plucking, and 35 recipes of everyday Korean food made by boiling, simmering and steaming. Korean food chef Cho Heesuk (2 volumes), Lee Hayeon (3 volumes), the Kimchi Association of Korea’s president and Food Master designated by the Ministry of Agriculture, Food and Rural Affairs (3 volumes), Korean food chef Roh Younghee (4 volumes), and Han Bokryeo (5 volumes), a master of royal cuisine of the Joseon Dynasty, participated in this work. It can be said that it is a work in which the ‘Korean Avengers’ participated. As a result, Korean recipes that started from the authenticity that captured the present and daily life were completed. This cookbook,
〈K FOOD: Secrets of Korean Flavors: Part 1, The Special Flavors of Korea〉
Prologue
The Five Secrets Behind the Taste of Korea
Bland; Wrapping and Mixing; Pickling and Fermenting; Digging, Picking and Plucking; Simmering, Boiling and Steaming.
Korea’s Specialty Dishes
Royal Cuisine, Gourmet Food for Royals
Three Women of Korean Royal Cuisine
The Cuisine Coexisting with Royal Court Food: The Food of Seoul’s Nobility
The Prestigious Heritage of Jongga Food
Understanding Jerye Food
Heritage Foods of Korea’s Renowned Jongga
Temple Food, the Taste of Enlightenment
Why Eating Temple Food is the Key to a Long Life
Praying for Health, Prosperity and Happiness: The Food of Korean Holidays
Food and Rites of Passage
Korean Food Basics
Foods Contemporary Koreans Like to Eat
Korean Condiments: Not Just a Seasoning but also a Medicine
Gomyeong: A Picture Drawn in a Dish
Deep Cuts: Korean Cooking Knives
Cooking Utensils for Korean Dishes
Artless Art, Kitchenware for Korean Food
The Feudal Ethics and Democratic Principles Contained in Korean Tables
Soban: The Mobile Dining Table for One
The Dining Tables of the Koreans
Dining with Guests
Daily Dining for Families
A Farmer’s Lunch Table
A Senior’s Birthday Dinner
Making Picnic Lunches for Families with Children
A Solo Diner’s Simple Dinner
A Weekend Meal for Three Generations
A Vegetarian’s Dinner
The Dining Table of a Long-Term Expat
A Korean Chef’s Formal Dinner
Appendix
What’s Inside Koreans’ Cupboards
Jongga Food in the Supermarket
Where to Experience Authentic Korean Food

〈 K FOOD: Secrets of Korean Flavors: Part 3, Pickling, Fermenting〉
Prologue
Pickling and Fermenting
Korean Fermentation Culture: Born from Scarcity
Making Jang
The Secret Behind the Taste of Ganjang and Doenjang
The Basis of Korean Food’s Complex Flavors: Doenjang and Ganjang
Blessed Are the Homes with Meju Hanging from the Eaves on the Jang-Making Day
The Secret Behind the Taste of Gochujang
Gochujang, Korean Soul Food
The Fermented Beans of Korea, Japan, and China
Best Korean Jang, Winners of the Good Fermented Food Awards
Korean Jang-Based Sauce Products
Beans in Korean Proverbs
Salt, the Hero in the Story of Fermentation
The Natural History of Sea Salt
Salt Products Available in Korea
Making Kimchi
The Secret Behind the Taste of Kimchi
Why is Kimchi Special to Koreans?
Is Kimchi Really a Superfood?
Gimjang: Making “Half-Year Food”
Without Onggi, Fermentation Does Not Occur
Jangdokdae: A Family’s Altar
Why Were Geumjul Wrapped Around Crocks?
The Invention of the Kimchi Refrigerator
The Korean Love of Jeotgal
In Praise of Jangajji
Fermenting Alcohol
Korea’s Fermented Alcohols Have Good Roots
Tasteful Drinks and Entertainment in Old Paintings
Drink Makgeolli if You Want to Understand Koreans
Malgeolli’s Transformation
Regional Signature Fermented Wine
Everyday Korean Food Made by Pickling and Fermenting

〈K FOOD: Secrets of Korean Flavors: Part 5, Simmering, Boiling, Steaming〉
Prologue
Simmering, Boiling and Steaming
Korea: A Nation of Broth
Simmering Soup
A Nation of Broth: Guk, Tang, Jjigae and Jeongol
Soup Dishes of the Royal Court
Guk: From the Cradle to the Grave
The Hidden Science of a Rich Broth
Ingredients for Making Broth
Boiled, Brewed and Stewed: Gomtang and Seolleongtang
The Old Gukbap Restaurants of Seoul
Korea: The Nation of Spoons and Chopsticks
Simmered Down: Yeot, Jocheong and Go
The Story Behind Sot
Boiling Noodles
Noodles, Broth, and the Koreans
Regional Noodle Dishes of Korea
Naengmyeon: A Mysterious, Indescribable Dish
In Search of Ramyeon (Instant Noodles)
A Timeline of Korean Ramyeon
Steaming Rice Cakes and Dishes
Seon and Jjim: The Slowest of Slow Foods
A Humanistic Approach to Tteok
The Beauty of Royal Rice Cake
Popular Tteok (Rice Cake) of Today
Tteoksal: Carved Out of Life Itself
Tteokbokki, a Nation’s Favorite
Everyday Korean Dishes Made by Simmering, Boiling and Steaming