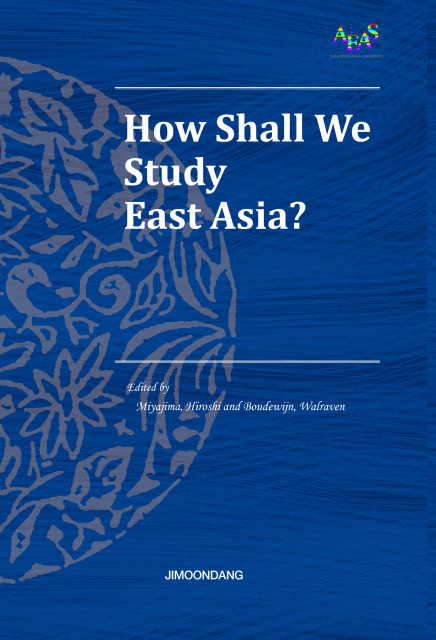 How Shall We Study East Asia?

AUTHOR : Hiroshi Miyajima , Walraven Boudewijn
ISBN : 9781931897082
PUBLISHER : Jimoondang
PUBLICATION DATE : December 29 ,2017,
SPINE SIZE : 0.9 inches
PAGES : 416
SIZE : 5.10 * 8.9 inches
WEIGHT : 1.4 pounds
CATON QTY : 22
PRICE : $55.95
The Academy of East Asian Studies in Sungkyunkwan University aims to focus on East Asia as a methodological approach, rather than simply treating the region as a topic of research. In order to clarify the meaning of “East Asia as method” I would like to discuss some examples in this preface. In approaching ‘East Asia as a method’ the following two points should be kept in mind. First, the issues examined within the framework of the new East Asian studies should have a universal meaning going beyond the confines of East Asia. Second, the new approach should be informed by a critical reassessment of the conventional framework of East Asian studies.

The first and foremost task in approaching East Asia as method is to conduct a fundamental review of the conventional binary division of world history into modern and pre-modern. In East Asian studies, it has been a convention to take the mid-nineteenth century as the dividing point between the two eras.

Many recent studies on East Asia have revealed that too many subjects on East Asian history and society cannot be appropriately understood by applying the modern versus pre-modern scheme. Another serious problem caused by the dichotomy of pre-modern and modern is that it has created partitions not only in the fields of research but also more generally in the system of learning and knowledge.

The book is composed of four sections. The first section, “Questions for East Asian Intellectual History” includes discussions on the methodology for studying East Asia. The second section, “The Reinterpretation of Confucian Culture” includes discussions on the problem of what conception of Confucian learning is indispensable for understanding East Asia. The third section, “Rule and Historical Consciousness” brings to light a wealth of literary sources and their usage in ruling the people in East Asian history. The last section, “Memories and Narratives” includes discussions on perceptions and representations of East Asia and Korea seen in literary works and narratives. Needless to say, the originality of individual articles lies with each individual author, yet the collection also reflects the success of fruitful academic debates conducted at the Academy of East Asian Studies. We are looking forward to comments and criticism from interested readers.

Miyajima Hiroshi is a Professor Emeritus of Tokyo University and a Special appointed Professor of Sungkyunkwan University. His research focuses on Korean history and Comparative history on East Asia with a special interest in social and economic practices.

Walraven Boudewijn is a Professor Emeritus of Korean Studies of Leiden University and a Distinguished Visiting Professor of Sungkyunkwan University. His research focuses on Korean cultural history with a special interest in religious practices, and Korean historiography. His article first appeared in the online journal Korean Histories 2.2 (2010), pp. 42-57.
Table of Contents

Reframing Discourse on East Asia
10 East Asia’s Early Modern Experience as Shaped by Confucian Modernity by Miyajima Hiroshi
34 Sinocentrism in East Asia and the Task of Overcoming It by LIM Hyung-taek
55 Is the Concept of a Transregional Geo-political Culture Applicable to East Asia? The Emergence of Tōyōshi and Modern Japan by Hamashita Takeshi
69 East Asian World Theory and Japanese Historical Studies: A Reexamination Inspired by Conversations with Korean History by Lee Sungsi

Reinterpretations of Confucianism
92 Sŏngho Yi Ik’s Commentary to the Analects and the Study of the Classics by the School of Practical Learning in Late Chosŏn by Lee Youngho
113 What Cèyĭn zhī xīn (Compassion/Familial Affection) Really Is by Kim Myeong-Seok
141 Confucian Tradition and Politics in Contemporary Korea by Kim Bi-Hwan
165 From Confucianism to Corporeality: A Historical Inquiry into the Cosmetic Surgery Boom in South Korea by Schwekendiek Daniel Jong

Governance and Society
182 The Changing Characteristics of the Shi in Ancient China and Their Significance by KIM Kyung-Ho
211 Types of Family Affiliation and Social Relations as Seen in the Household Registers and Lineage Genealogies of Chosŏn Korea by Son Byung-giu
246 A Comparative History of Property Ownership and Property Transactions in the Late Chosŏn Period: Towards a Reconsideration of the Eurocentric Perspective by Bae Hang-seob
289 Law and Literature in Late Imperial China and Chosŏn Korea by Park Sohyeon

Memory and the Narration of History
316 Divine Territory: Shaman Songs, Elite Culture and the Nation by Walraven Boudewijn
346 17th-Century East Asian Warfare and Korean Narrative Poetry in Classical Chinese: Telling Historical Truth through the Memories of Hostages by JIN Jae-Kyo
372 Formation of the Minganhak and Modern Magazines in Colonial Korea: The Case of Gaebyeok by HAN Keehyung
391 The Transnational Imagination and Historical Geography of 21st-Century Korean Novels by Lee Hye Ryoung