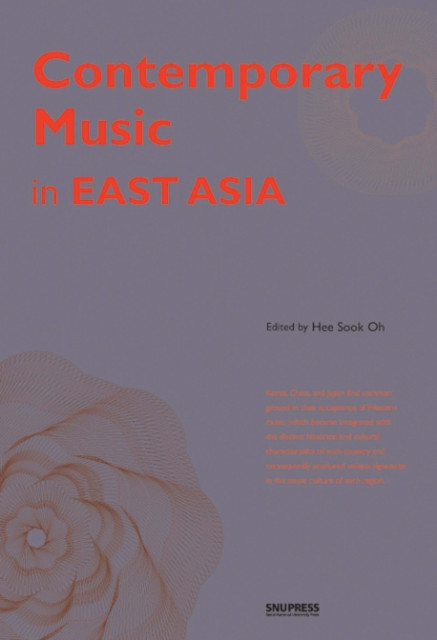 AUTHOR : Hee Sook Oh , Christian Christian Utz
ISBN : 9788952115249
PUBLISHER : Seoul National University Press
PUBLICATION DATE : January 30 ,2014,
SPINE SIZE : 1.2 inches
PAGES : 330
SIZE : 6.8 * 9.7 inches
WEIGHT : 1.7 pounds
CATON QTY : 20
PRICE : $85.95
The Music of “Our Times”: An Overview
How might the recent contemporary music of East Asia be described?
The 21st century is marked by an age of global culture in which East Asian countries are becoming increasingly interconnected. Recognizing the need for an integrative analysis of the state of East Asian contemporary music, music scholars from Korea, China, Japan, the United States, and Germany came together to write this book.
Korea, China, Taiwan and Japan find common ground in their acceptance of Western music, which became integrated with the distinct historical and cultural characteristics of each country and consequently produced unique signatures in the music culture of each region. This book investigates how contemporaneous music that share similar histories combined with the musical, socio-cultural, and ethnic particularities of each country to form diverse music worlds. In addition, the book analyzes not only how such music worlds appear but their predicted trajectories as well. In the discussions, the works of representative contemporary music composers of Korea, Japan, and China, such as Byungki Hwang, Unsuk Chin, Toshio Hosokawa and Tan Dun, are examined. Such analyses are expected to shed light on the general trends in East Asian contemporary music and place them within a historical context.