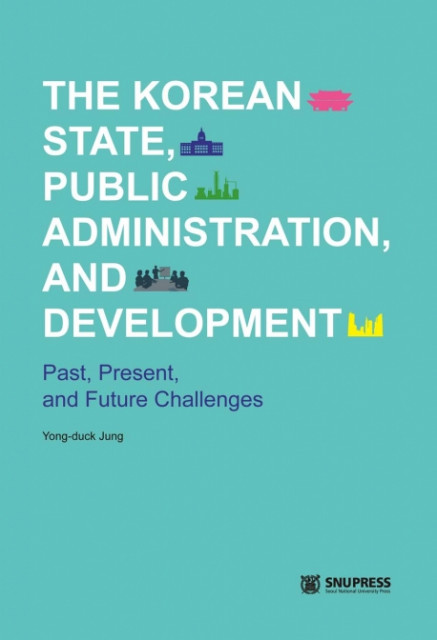 The Korean State, Public Administration, and Development
Past, Present, and Future Challenges

AUTHOR : Yong-duck Jung
ISBN : 9788952115676
PUBLISHER : Seoul National University Press
PUBLICATION DATE : January 15 ,2014,
SPINE SIZE : 0.10 inches
PAGES : 388
SIZE : 6.1 * 8.9 inches
WEIGHT : 1.6 pounds
CATON QTY : 20
PRICE : $137.45
Many new nation-states emerged immediately after the end of World War II in the mid-20th century. These states respectively pursued their own path toward national development. Their goal was to surpass the Western countries in the speed of their own development. But, in the seventy years that have passed since then, only a very few countries have achieved that goal. In this regard, Republic of Korea fully deserves the global recognition it has received for that remarkable achievement. In the latter part of the 20th century, Korea has successfully completed state-building, industrialization, and democratization.
In considering the national development of the last seventy years and the solutions to the present and future challenges facing Korea, one has to take into account the crucial role played by the state and public administration. In all countries, the state and the bureaucracy as the largest organized entity have the greatest impact on the lives of the people. This is especially true of Korea whose process of institutionalization has led to the creation of a strong state. In this book, the author analyzes the role of the state and public administration in the national development and their own development in performing that role in the last seventy years.
The author devotes most of book chapters to how the Korean state and public administration have become institutionalized during the last seventy years. By understanding the nature of the institutionalization of them, the readers may be able to imagine how the Korean state and public administration will change and maintain continuity in the future. The state and the bureaucracy as a collective entity have a strong tendency to maintain continuity, which make them inevitably path-dependent.

Yong-duck Jung is professor at the Seoul National University (SNU) and president of the Korean Social Science Research Council. He studied at SNU and University of Southern California (USC), obtaining BS, MPA and Ph.D. in Public Administration, and was a research scholar at the London School of Economics and the Free University of Berlin. He has served as director of the Advanced Center for Administrative Development and as senator of SNU, trustee of the Hansung University, adjunct professor at the Central Officials Training Institution, president of the Korean Association for Public Administration and the Korea Institute of Public Administration, executive member of the Research Committee on Globalization and Governance of the International Political Science Association, and council member of the Section on Chinese Public Administration of the American Society for Public Administration and the Japanese Association for the Study of Political Society. Dr. Jung has acted at the editorial board of several academic journals including Governance, International Public Management Journal, Korean Journal of Policy Studies (editor) and Korean Public Administration Review (editor). He has consulted to a wide variety of public organizations, including member of the Presidential Committees for Administrative Reform, the Organizing Committee for the 6th Global Forum on Reinventing Government, and the Social and Human Sciences Sub-committee of the Korean National Commission for UNESCO, chair of the Innovation Committee of Ministry of Foreign Affairs and Trade, the Financial Performance Evaluation Committee of the Ministry of Planning and Budget, the National Informatization Evaluation Committee, and the Academic Council of USC Schwarzenegger Institute for State and Global Policy, and co-chair (with Prime Minister) of the Administrative Information Sharing Committee and the Government Performance Evaluation Committee. Professor Jung’s teaching and research subjects include Public Administration Theory and Philosophy, Comparative State Institutions and Policy Capability, and Governance and Public Leadership. He has written and edited many books including Public Administration in the Modern State, The State Apparatuses in Korea and Japan, Collaborative Governance in the United States and Korea, and Public Conflicts and Policy Coordination Leadership.
Preface by Gerald E. Caiden
Introduction