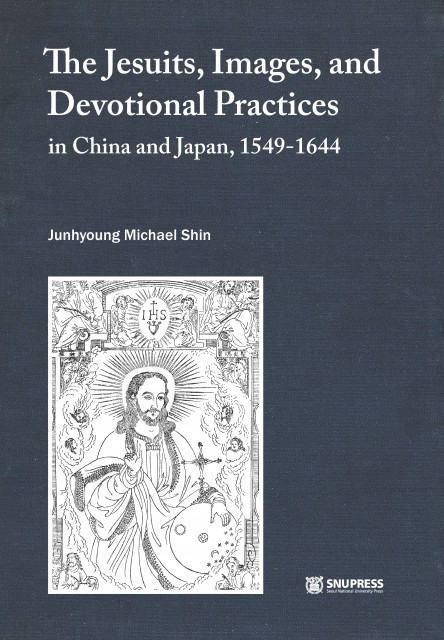 The Jesuits, Images, and Devotional Practices in China and Japan, 1549-1644

AUTHOR : Junhyoung Michael Shin
ISBN : 9788952119230
PUBLISHER : Seoul National University Press
PUBLICATION DATE : November 30 ,2017,
SPINE SIZE : 0.9 inches
PAGES : 316
SIZE : 6.1 * 8.9 inches
WEIGHT : 1.4 pounds
CATON QTY : 20
PRICE : $94.45
This book discusses the existence of Christianity introduced and propagated by the Jesuits in the sixteenth and seventeenth-century China and Japan, and explores how the Asian people, imbued with their indigenous traditions of Buddhism and Confucianism, perceived, reacted, and some of them even embraced the foreign faith. My narrative starts from the year 1549, when St. Francis Xavier landed in the island of Kagoshima, and ends with the fall of the Ming dynasty in 1644, by which Fr. Giulio Aleni’s mission work in Southeastern China had reached its highpoint and gradually dissipated afterwards. I have always been interested in the Jesuits’ endeavors, since their accommodation policy to indigenous culture opened a way that Asian people could understand the Western religion in comparison to their own heritages of religious concepts and imagery, even though it was not the Jesuits’ original intention and often led to the confusion and conflation of different religious ideas.

There are four points, I believe, that distinguish my narrative from hundreds of other academic literature that have been written on the Jesuit missions in China and Japan. First of all, I discuss the exclusively religious dimensions in their endeavors. In this regard, I was deeply inspired by late Prof. Erik Zürcher’s assertion that “Christianity was not just an intellectual construct but a living minority religion, a complex of beliefs, rituals, prayer, magic, icons, private piety, and communal celebration.”* Indeed, my chapters discuss in sequence the themes of icon, soteriology, contemplation, exorcism, bodily mortification, and the question of the hereafter. The studies on the Jesuit mission, especially that in China, have been largely gravitated towards the intellectual contacts and exchanges between the West and East, due to the Jesuits’ pro-Confucian policy and their understanding of Confucianism as political and ethical discourses. Secondly, as an art historian, I pay particular attention to the cases in which visual experience played significant roles in the perception of Catholicism. By visual experience, I refer not only to materially fabricated images such as painting, sculpture, and print, which have been the objects of art history in conventional sense, but a more comprehensive range of imagery, visible and tangible, such as vision, dream, rituals, and even self-flagellation. Thirdly, I attempt to discuss the cases of China and Japan in comparison and ask the reasons why the same religion of Catholicism has faced different reactions in China and Japan, which shared many common cultural and religious heritages. The studies of China Jesuits and Japan Jesuits are deemed almost as separate fields in current scholarship, but I think that their comparison brings to light interesting points to ponder on. Finally, I directly quote in my translation as many missionary reports and devotional literature as possible, from both European and Asian sources. I hope that, even if my arguments do not contribute much to scholarship, my references to these raw sources would be of use to other scholars in this field.

The first chapter discusses the introduction of Christ’s icon, Salvator Mundi, to the Chinese at the incipient stage of catechesis. The icon served effectively the Jesuits’ purpose, as I argue, largely due the setting and mode of its presentation, which reminded the Chinese of their deeply rooted tradition of Confucian ancestral rites. Even though this was not what the Jesuits intended, such analogical perception of icon and associated ritual facilitated the Chinese to be familiarized and eventually emphasize with the Western religion, at least in the early stage of mission. The second chapter moves to the case of Japan, where Buddhist tradition had a more dominant status in society. There, the perception of Christ as savior and Mary as feminine intercessor naturally brought in their comparison and even confusion with Amitabha Buddha and bodhisattva Avalokiteśvara. Such analogy is further found in the meditative method based on visual imagination, commonly expounded in the Jesuit Catholicism and Pure Land Buddhism. The third chapter elaborates on this dimension of visually oriented meditation, and discusses how the Jesuit method of contemplation could take advantage of indigenous Buddhist, and to a lesser degree Confucian, traditions in China and Japan.
The next three chapters deal with even more strongly religious dimensions. The chapter four recounts the miraculous healing, exorcism, and vision experienced by the Chinese Christians. Not only commoners, but also literati and officials fully conversant in Confucian teachings found great consolation and persuasion in these supernatural phenomena. The chapter five discusses the Christian self-mortification of flagellation. Especially this chapter makes a sharp contrast between the cases of Japan and China. The practice of self-flagellation took almost fifty years to be accepted by Chinese Christians, but the first report of Japanese Christians undertaking “discipline” appeared in just five years from the beginning of Japan mission. This is an intriguing case that attests to the difference in the reception of Catholicism in China and Japan, which, despite their common heritages, also had their distinctive cultural backgrounds. The final chapter of this book is devoted to the final question of every religion, the afterlife. With the case in China, I compare the afterlife explanations in Catholicism, Confucianism, and Buddhism, and attempt to underline the key solution Christianity could provide to the Chinese, which was lacking in other indigenous religions.

Junhyoung Michael Shin is a professor of art history in the Dept. of Archaeology and Art History, College of the Humanities, Seoul National University.
Introduction