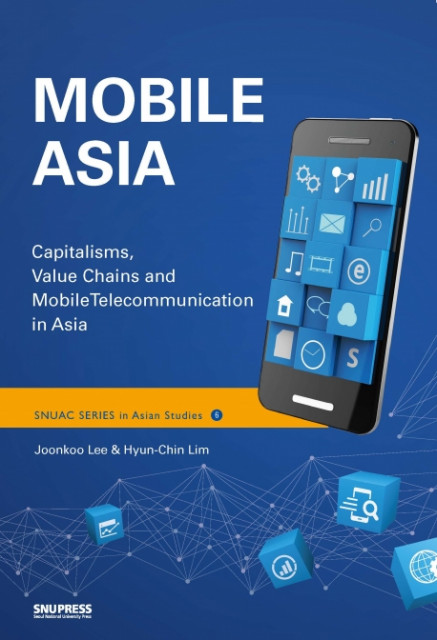 AUTHOR : Joonkoo Lee , Hyun-Chin Lim
ISBN : 9788952119865
PUBLISHER : Seoul National University Press
PUBLICATION DATE : August 10 ,2018,
SPINE SIZE : 0.9 inches
PAGES : 332
SIZE : 6.1 * 8.9 inches
WEIGHT : 1.4 pounds
CATON QTY : 20
PRICE : $94.45
This study pays attention to mobile transformation in Asia and the way it shapes a rising transnational Asia and its organizational and institutional forms of interconnection and interaction. How has Asia become so central in the global mobile telecom industry? How has mobile telecom changed national economies and the way they are connected with each other and to a broader global economy? How do the ways they are integrated to mobile telecom global value chains and international trade networks converge and diverge? How has the rise of mobile usage affected societies in Asia? More broadly, what do all these speak to the present and the future of Asian capitalism(s)?
The rise of Asia is significantly attributed to internal and external connections that the region has developed through global and regional production networks. A dense web of inter-firm networks plays a key role in deepening regional integration but also in advancing the region’s position in the mobile phone GVC. This study provides a valuable assessment of how Asia as a whole has emerged as a key player in the global mobile telecom industry, how Asian countries are integrated to global and regional value chains similarly and differently, and how the convergent and divergent development paths and firms’ business strategies have affected the growth and upgrading trajectories of Asian economies and firms in the global mobile telecom industry.

Joonkoo Lee is an Assistant Professor of Organization Studies in the School of Business at Hanyang University, Seoul. Before joining Hanyang in 2012, he was a postdoctoral research scholar in the Social Science Research Institute at Duke University, and a sector coordinator for the Capturing the Gains research program. In 2014-2015, he was a visiting research fellow at Asia Center at Seoul National University. His research interests include globalization and development, global value chains, organizational studies, political economy in Asia, and cultural and creative industries. His work has appeared in Proceedings of the National Academy of Sciences of the United States of America, Journal of Business Ethics, Journal of Contemporary Asia, and Journal of Supply Chain Management. He received his Ph.D. in Sociology from Duke University and his M.A. and B.A. from Seoul National University.

Hyun-Chin Lim is Professor Emeritus of Sociology and Founding Director of Asia Center at Seoul National University. He is an elected member of the National Academy of Sciences, Republic of Korea. Currently, he is chairing the Committee on Civil Society Development, Office of the Prime Minister. He received his B.A. and M.A. in Sociology from Seoul National University and his Ph.D. in Sociology from Harvard University. He was previously the Dean of Faculty of Liberal Education, the dean of the College of Social Sciences, and the founding director of Asia Center, all at Seoul National University. He worked as a member of the Executive Council, Society for the Advancement of Socio-Economics. He also served as the president of professional associations including the Korean Association of NGO Studies, Korean Sociological Association, International Development and Cooperation Association, Korean Association for Political Society, and Korean Social Science Research Council. His publications include more than 55 books and over 250 scholarly articles on dependency, development, democracy, and civil society in East Asia and Latin America.
Preface

1 Introduction
Mobile Asia: Weaving Connection and Interaction in Asia and Beyond
Research Questions and Findings
Methodological Note
Organization of the Book