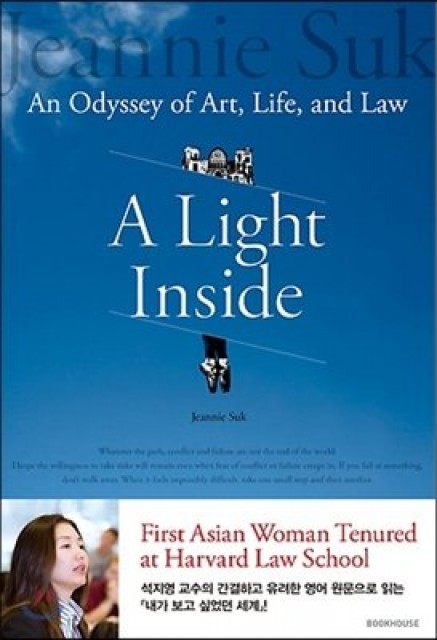 A Light Inside
An Oddyssey of Art, Life and Law

AUTHOR : Jeannie Suk
ISBN : 9788956056326
PUBLISHER : Bookhouse Publishers
PUBLICATION DATE : February 26 ,2013,
SPINE SIZE : 0.7 inches
PAGES : 268
SIZE : 6.1 * 8.9 inches
WEIGHT : 1.2 pounds
CATON QTY : 30
PRICE : $28.99
The first Asian Woman tenured at Harvard Law School, Guggenheim Fellow, Herbert Jacob Prize Winner, 'Best Lawyers Under 40' by the NAPABA, Jeannie Suk tells her heartfelt story. By telling her old love for Ballet, Piano and reading, she guides us to her passionate life and work and finally to the world "that she wanted to see". She decided to write this book because she was frequently asked to explain the connection between how she grew up and how she works and lives now. What world do we want to see? What is "education" in its true sense? What is "life" where one paves one's own path? Through this clean and elegant memoir, we learn that one's attitude and passion for life is the most important in life. and she suggests that we should be brave as we have freedom to be imperfect. Also she tells about her disciplines of life and work. One of those is "find what you really love to do."

Jeannie Suk, a Guggenheim Fellow, is a law professor at Harvard who specializes in criminal law and family law. Born in Seoul, Korea, she studied at the School of American Ballet and the Juilliard School. She received her B.A. in literature from Yale, and was awarded a Marshall Scholarship to study at Oxford where she received her doctorate in literature. She attended law school at Harvard, and clerked for Justice David Souter on the United States Supreme Court. Her writing has appeared in the Yale Law Journal, Stanford Law Review, Wall Street Journal, and Slate. She has been interviewed about her research by Dan Rather for Dan Rather Reports, and by ABC News.
1. The first essay of Jeannie Suk, first Asian Woman Tenured at Harvard Law School
2. Her Journey of Life and thought about how to learn and how to pave her own unique path.
3. Humanities, Arts, and Law. . . Here is the pursuit of Intellect and sensibility that has formed Jeannie Suk.