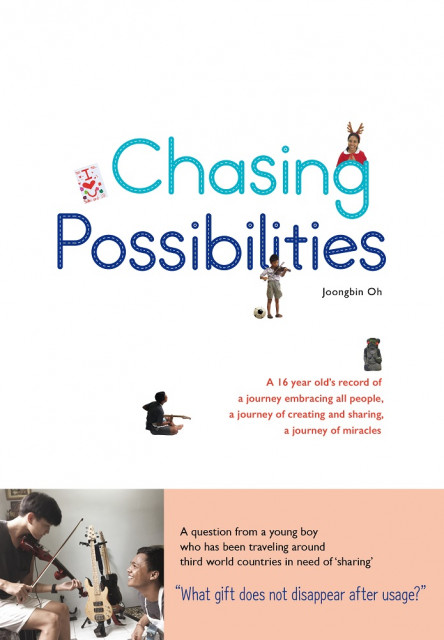 Chasing Possibilities
A 16 year old’s record of a journey embracing all people, a journey of creating and sharing, a journ

AUTHOR : Joongbin Oh
ISBN : 9788956056920
PUBLISHER : Bookhouse Publishers
PUBLICATION DATE : February 12 ,2018,
SPINE SIZE : 5.2 inches
PAGES : 216
SIZE : 5.8 * 8.4 inches
WEIGHT : 0.8 pounds
CATON QTY : 20
PRICE : $26.45
This book is a story of young traveler who goes to live life with the locals in a third world countries with only soccer ball and a violin in hands. Joongbin Oh, the writer of this book, starting with a backpacking trip to Turkey with his mom―She is famous essayist in Korea― when he was only 3 years old. After then, he has traveled to numerous third world countries including Myanmar, Syria and Uganda, amassing a travel record that could match and exceed any adult’s. When he turned 12 years old, he encountered an orphanage named ‘Permata Hati’ in Ubud, Indonesia. As he came to be a part of Permata Hati, he organized a volunteering program called Voluntraveling, enabling tourists to volunteer and donate. After he organized this program, so far over 300 Koreans have participated in this program. And Permata Hati’s children grew day by day through new learning from volunteers. At last, Permata Hati’s children organized music band, won a prize in a music contest. In addition to music, Permata Hati’s children learned a lot from volunteers such as English, Korean, making picture book, computer, math, etc. Through these learning, Permata Hati’s children have grown up to be self-confident children. He suggests that if we sharing little bits we have, it is possible a big miracles occurs. Also he tells about the importance of sharing with sustainability.

Starting with a backpacking trip to Turkey with his mom when he was only 3, he has traveled to numerous thirdworld countries including Myanmar, Laos, Syria, and Uganda, amassing a travel record that could match and exceed any adult’s. Until the age of 6 he always carried around a soccer ball, and always played soccer with the local children of the places he traveled to.

From age 7 he started traveling with a violin. For his friends who had never seen a violin in their lives, he would put on small but harmonious little concerts anywhere from in the front yard of guesthouse to under palm trees. He also sometimes became a street musician and got to spread his music even farther.

The year when he turned 12, he encountered an orphanage named ‘Permata Hati’ in Ubud, Indonesia. As he came to be a part of Permata Hati, he organized a volunteering program called Voluntraveling, enabling tourists to volunteer and donate. It was in this process he learned of the miraculous way in which growth can occur when the value of ‘sharing’ comes together with ‘sustainability’. So far over 300 Koreans have participated in this program.

Up until now he has traveled to over 30 third world countries. And from that experience, he knows how to make friends with anyone, anytime and anywhere. After graduating, he would like to work at an international organization and help make policies regarding children (elementary) education.
PART 1 Beginning

- Becoming a backpacker at only 3
- The fundamentals of traveling
- Replacing Inconsideration
- What present will not disappear after use?
- The two irreplaceable tools

- The destined encounter, ‘Permata Hati’
- Closer through music
- Ayu’s first letter
- The return. The start of magic
- Ayu’s second letter
- Help recognizes each other and unites
- A happy farmer of a fertile land
- The script of “Brahma’s other world”
- Ayu’s third letter
- Expanding the realm of possibility
- Ayu’s fourth letter
- Everybody, every instrument
- Ayu’s other letters
- Now, time to unite with more


PART 3 A challenge: The birth of Voluntraveling


PART 4 Continuing: A report on the second Voluntraveling