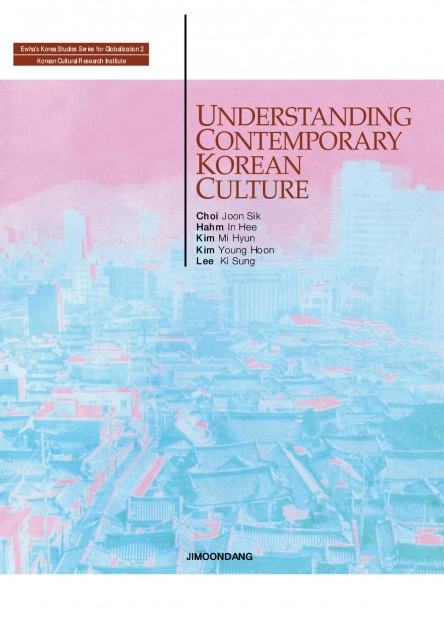 AUTHOR : Joon Sik Choi
ISBN : 9788962970227
PUBLISHER : Jimoondang
PUBLICATION DATE : January 01 ,2011,
SPINE SIZE : 0.7 inches
PAGES : 302
SIZE : 7.5 * 9.10 inches
WEIGHT : 1.5 pounds
CATON QTY : 24
PRICE : $40.00
The Korea Culture Research Institute (KCRI) at Ewha Womans University is proud to announce the publication of Ewha's Korea Studies Series for Globalization, a comprehensive set of textbooks on Korean language, culture, history and arts that can deliver academic, yet realistic information about Korea to domestic and foreign college level students in and out of Korea, as well as Koreans living abroad.
Understanding Contemporary Korean Culture, Ewha's Korea Studies Series for Globalization 2 explores the cultural phenomena in Korea that have resulted from dramatic economic growth and rapid change in society over a short period of time. This book covers various aspects of Korean culture including Korea's daily culture by focusing on food, clothing and shelter, the characteristics of the modern Korean family and the status of women, the religious pluralism of Korea, Korea's 20th Century Popular Culture originating from the Korean Wave Hallyu, and the current situation of divided Korea.
Chapter 1 Korea's Everyday Culture takes a look at Bibimbap, Kimchi and the 'Mash-up' Culture, the coexistence of traditional house Hanok villages and modern apartment complexes, modernization of the time-honored garment Hanbok, and Korea's unique 'We-ism' in the internet age.
Chapter 2 Characteristics of Modern Korean Family and the Status of Women analyzes a family cycle transition based on marriage and childbearing, and presents both optimistic and pessimistic views with regard to the changing status of women.
Chapter 3 Understanding Korean Religion explores the intriguing situation of Korea, in which various religions ranging from shamanism and Buddhism to Confucianism and Christianity coexist in peace, while at the same time eastern Buddhism and western Christianity are competing against each other.
Chapter 4 Understanding Korea's 20th Century Popular Culture examines Korean pop culture against the backdrop of gradual changes in society over time, starting from the times of freedom and chaos in the 1950s, through the 1960-70s when economic development was in full force, continuing through the 1980s which witnessed the emergence of a resistant culture as well as the rise of teenagers as new consumers, to the end of 1990s and 2000s when Korea became one of the major international cultural exporters with new digital generation and the Korea's Hallyu boom.
Finally, Chapter 5 Cultural History of Division analyzes Korea's social reality through the eyes of Korean literature and popular songs, depicting the destruction of humanity induced by the Korean War and portraying the pain suffered by families separated due to war.

Professor Choi earned B.A. degree in Korean History from Sogang University, Korea and received Ph.D. degree in Religious Studies from Temple University in Philadelphia in 1988. He has held the position of Professor of Korean Studies at Ewha Womans University since 1992. His research interests are religious studies, and socio-cultural studies and arts of Korea. He is currently the director of Korean Culture Research Institute at Ewha Womans University. He is an author of many books such as Understanding Koreans and Their Culture, Folk Religion, Buddhism: Religion in Korea and so on.
Chapter 1 Korea’s Everyday Culture

Ⅱ. The Current Situation of the Korean Family 62
1. The process of getting married 62
2. Typical gender roles in a marriage 63
3. Sexual relations before and after marriage 64
4. Divorce and remarriage 65
5. The status of kinship 66
6. Preparation for aging 67
7. Korean family values 68

Ⅲ. The Change of Family Life Cycle: From Institutional Family to Companionate Family 69

Ⅳ. The Status of Women: A “Subtle Revolution” 72
1. The age of subtle gender discrimination 72
2. Social institutions and the status of women 74

Chapter 5 The Cultural History of Division: Over the Boundary toward Liberation

Ⅰ. Severance and Borders: The Background and Formation of Division 225
1. From liberation to division 226
2. War and the cultural history of division 240

Ⅱ. Tension and Search for Reconciliation: Cultural Policy of Division 248
1. Division and effort toward reunification 248
2. Culture of division 253