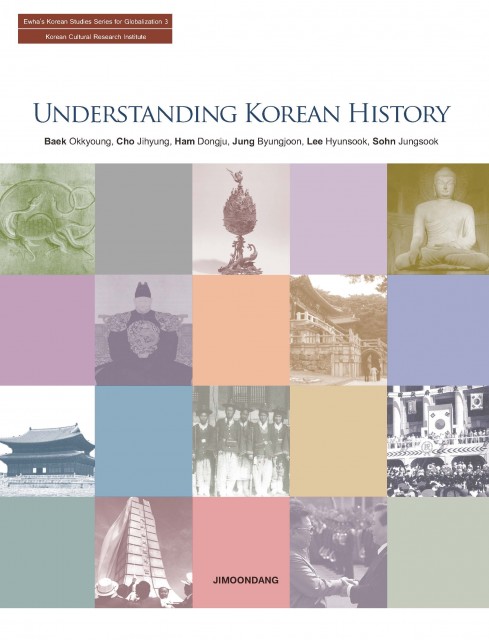 AUTHOR : Okkyoung Baek
ISBN : 9788962970241
PUBLISHER : Jimoondang
PUBLICATION DATE : May 31 ,2011,
SPINE SIZE : 0.8 inches
PAGES : 332
SIZE : 7.5 * 9.10 inches
WEIGHT : 1.5 pounds
CATON QTY : 24
PRICE : $42.00
A complete understanding of Korea requires broad knowledge of Korea's history. There has been a sharp increase in the number of foreign researchers who take an interest in Korea and want to learn about Korea's history. Understanding Korean History, Ewha's Korean Studies Series for Globalization 3 is an introduction to the history of Korea for beginners written by Korea's prominent scholars.
This book was written after ascertaining, through the KCRI's active exchange with major universities overseas, the level of background knowledge of prospective readers and their academic inquiry. Accordingly, by providing recent studies and varied views, this book will help readers to easily and systematically understand the development of Korea's history and gain overall knowledge about Korea's past and present. This introductory book also offers a great opportunity for its readers to take further interest in various aspects of Korea beyond its history.

4. Goryeo
1) Ruling Structure and Society of the Earlier Goryeo Period 57
A. Reunification Process and the Restructuring of the Ruling System 57
B. Establishment of Aristocratic Society 61
C. External Relations and Trade 63
2) Social Unrest in the Late Goryeo Period 66
A. Military Regime and People’s Uprisings 67
B. Battles against the Mongols and Interventions of Yuan 70
3) Culture of Goryeo 76
A. Coexistence of Buddhism and Confucianism in Early Goryeo 76
B. New Trend of Buddhism in the Late Goryeo 79
C. Acceptance of Neo-Confucianism 81
D. Advanced Technology of Goryeo 82
4) Reform in Late Goryeo and Change of Dynasties 86
A. Changes in the International Order and Withdrawal from Wihwa Island 86
B. Yi Seonggye and the New Dynasty 90

5. Founding of Joseon and Neo-Confucianism
1) Founding of Joseon and Managing of the State 95
2) Political System of Joseon 99
A. Securing of the Political System 99
B. Implementation of Economic Policies for Public Welfare 103
C. Stabilization of Social Status 105
D. Managing of Foreign Policies 107
3) Formation of Joseon Culture 110
A. Establishing the Cultural Framework of Neo-Confucianism 110
B. Hangeul, the Cultural Treasure and Asset of Korea 112
C. Development of Science and Technology 114
4) Emergence and Growth of Sarim 116
A. Emergence of Sarim 116
B. Political Growth of Sarim 118
C. Development of Private Academies and the Village Code 119

6.Changes in the Late Joseon Period
1) Foreign Invasions and Influences 125
A. The Japanese Invasion in 1592 125
B. Manchu Invasions 130
2) Factional Politics and Implementation of Tangpyeongchaek 132
A. Factional Politics 132
B. Tangpyeongchaek of King Youngjo and Jeongjo 134
3) Shifts in Society and Search for a New Order 136
A. Changes in Rural and Urban Areas 136
B. Changes in Social Structure 139
C. Emergence of New Academic Tradition 141
D. New Trends in Literature and Arts 144
E. Advances in Science and Technology 145
4) Sedo Jeongchi and People’s Resistance 146
A. Structure of Sedo Jeongchi and Its Downsides 146
B. Social Reforms 148

7. Opening of Ports and Modernization Process
1) Opening of Ports 154
A. International Landscape in the First Half of the Nineteenth Century 154
B. Heungseon Daewongun’s Reform and Closed-Door Policy 155
C. Opening of Ports and Signing of Unfair Treaties 158
2) Progressives and Conservatives 160
A. For and Against Enlightenment Policy 160
B. Coup of the Gapsin Year 163
C. Uprising of Donghak Peasant Army 165
3) Road to a Modern State 170
A. Gabo Reform 170
B. Independence Club and the People’s Mass Assembly 173
C. Founding of the Great Han Empire and Its Reforms 176
4) Japanese Colonization and Resistance of Koreans 178
A. Colonization of Korea 178
B. Resistance of Koreans against Japan 180
5) Introduction and Establishment of Modern Culture 183

9. Dawn of Modern Korea
1) Liberation and Formation of a Divided Nation 219
A. Liberation and Division at the Thirty-Eighth Parallel and Military
Government 219
B. Conflicts between North and South, US and Soviet Union, and Right and Left 224
C. Founding of the Republic of Korea 230
D. Founding of the Democratic People’s Republic of Korea 232
2) Korean War 233
A. Outbreak of the Korean War and Its Nature 233
B. Progression of the War 235
C. Armistice Agreement and Aftermath of War 240
3) Korean Politics in the 1950s 242
A. Constitutional Amendments and Dictatorship 243
B. Citizens’ Uprising of April 19, 1960 245
C. Chang Myun Government 247
4) Korean Economy in the 1950s 248
A. From Colonized Economy to Divided Economy 248
B. Post-war Economic Reconstruction 250

10. Legend of Democracy and Economic Growth
1) Toward Democracy: Political Map after 1961 256
A. 1960s-1970s: Park Chunghee, Yushin System and the Assassination 256
B. 1980s: Chun Doohwan, Gwangju Uprising and the June 10 Demonstration 263
C. Institutional Democratization 268
2) Miracle on the Han River 270
A. Strategies for Economic Development 272
B. Development of Heavy and Chemical Industries 275
C. Challenges of the Korean Development Model and the Modern Economy 278
3) Modern Society and Culture 281
A. Industrialization and Urbanization 281
B. Culture of Modern Korea 284