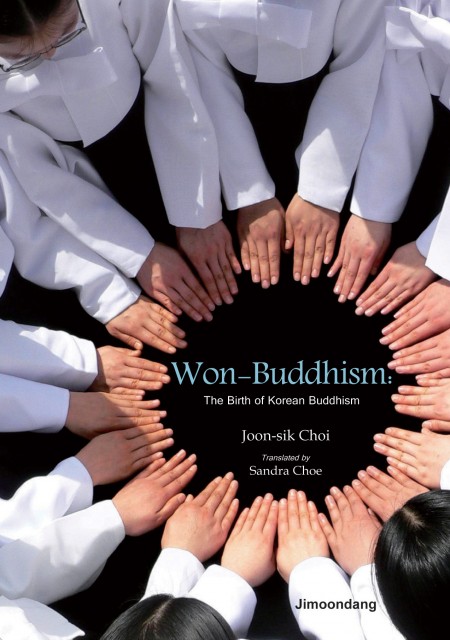 Won-Buddihism
The Birth of Korean Buddhism

AUTHOR : Joon-sik Choi
ISBN : 9788962970357
PUBLISHER : Jimoondang
PUBLICATION DATE : September 05 ,2011,
SPINE SIZE : 0.8 inches
PAGES : 175
SIZE : 5.9 * 8.3 inches
WEIGHT : 1.1 pounds
CATON QTY : 32
PRICE : $26.00
This book is about new Korean Buddhism called "Won Buddhism" which was created by a religious genius named Chungbin Park (Sot'aesan) in 1916. Park innovated traditional Buddhism in the following various ways. First, Won Buddhists do not worship Buddha statues any longer, but instead enshrine circle (Il-Won-Sang) as a symbol of the Truth. That is why this Buddhism is called Won Buddhism ('won' means circle in Korean). Secondly, celibacy system of traditional Buddhism is no longer valid in this Buddhism. But it should be noted that only male minister can marry, not female minister! Thirdly, we can find many Won Buddhist temples in the cities, whereas traditional Buddhist temples are located in deep mountains. The fourth characteristic of Won Buddhism is that canons of this Buddhism are written in easy modern Korean, while those of traditional Buddhism are mainly in difficult classical Chinese. This book may be remembered as the first easy introductory book in English on Won Buddhism.

Professor Choi earned B.A. degree in Korean History from Sogang University, Korea and received Ph.D. degree in Religious Studies from Temple University in Philadelphia in 1988. He has held the position of Professor of Korean Studies at Ewha Womans University since 1992. His research interests are religious studies, and socio-cultural studies and arts of Korea. He is currently the director of Korean Culture Research Institute at Ewha Womans University. He is an author of many books such as Understanding Koreans and Their Culture, Folk Religion, Buddhism: Religion in Korea and so on.
Acknowledgment / vii

A Mature and Enlightened Being / 1

In Preparation for True Work / 36

“With this Great Opening of matter, let there be a Great

How should we train?-Personal practice / 88

How to create a just society-Serving the Community / 128

Won Buddhism Today and Its Problems / 149

More teachings of Sot’aesan not to miss / 161