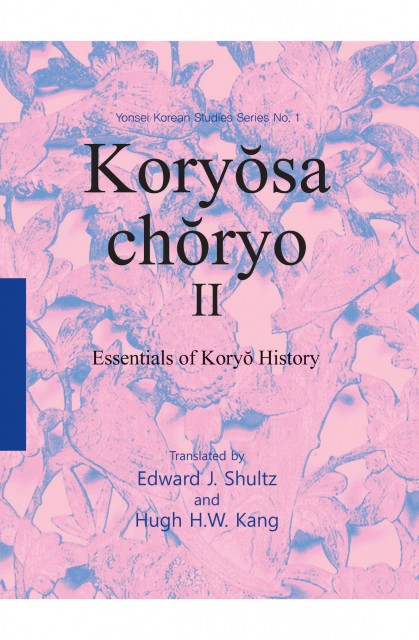 AUTHOR : Edward J. Shultz
ISBN : 9788962971699
PUBLISHER : Jimoondang
PUBLICATION DATE : December 09 ,2014,
SPINE SIZE : 0.8 inches
PAGES : 426
SIZE : 6.2 * 8.9 inches
WEIGHT : 1.5 pounds
CATON QTY : 24
PRICE : $45.00
The Koryǒsa chǒryo (Essentials of Koryǒ History) is one of the most important historical records of the Koryǒ kingdom (918-1392). Presented in 1452 and compiled under the leadership of Kim Chongsǒ and 28 men, it appeared one year after the publication of the Koryǒsa (History of Koryǒ). Compressed to 35 books, this is an abridged version of the Koryǒsa. The Koryǒsa chǒryo offers a chronological presentation of the events of the Koryǒ kingdom. As each year unfolds the Koryǒsa chǒryo captures the spirit and feeling of Koryǒ, recording the triumphs and trials of the dynasty. This history describes the actions of the kings, the life of the court and its aristocrats, abbreviated biographies of noteworthy individuals, changes to Koryǒ’s social and political institutions, foreign contacts, as well as such natural events as floods, famines, and earthquakes. This volume covers the years from 1147 to 1259.

Professor emeritus at the University of Hawaii at Manoa, and was a Visiting professor at Sogang University in 2014 in Seoul where he taught Korean history. His major area of research is Koryo history with a special interest in social, institutional, and political history. His recent publications include Generals and Scholars in Medieval Korea, Honolulu, University of Hawaii Press and he edited and helped translate the The Koguryǒ Annals of the Samguk sagi and with Hugh H. W. Kang translated The Silla Annals of the Samguk sagi.
Preface

Introduction to the Koryosa choryo