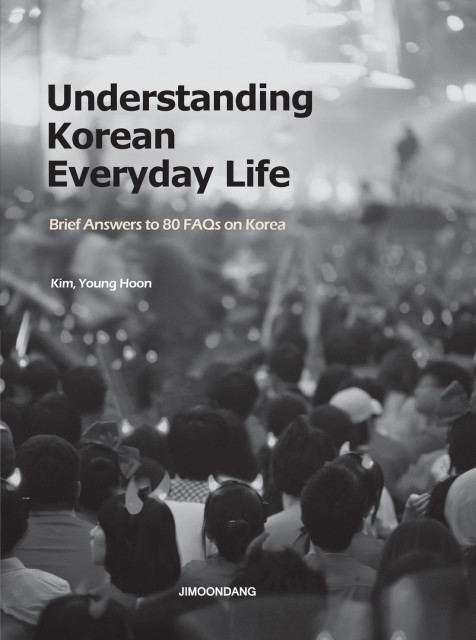 Professor of Department of Korean Studies at the Graduate School of International Studies and the Director of the Research Institute of Korean Culture at Ewha Womans University. He is a cultural anthropologist. He received his degrees from Yonsei University (B.A.), Indiana University (M.A.) and University of Southern California (Ph.D.).
Preface V

I. Greeting Manners 1
1. How do Koreans greet strangers for the first time? 3
2. Why is it rude to call older people by their names? 4
3. Why do Koreans ask personal questions to people they hardly know or meet for the first time? 7
4. When people meet their acquaintance by chance, why do they usually ask “where are you going?” 9

IV. Study & Work 55
26. Why do high school seniors have dinner at their schools? 57
27. Why are Korean parents so obsessed with their child’s education? 59
28. Why do companies allow workers to come late on the day when the College Scholastic Ability Test is being held in high schools? 61
29. Koreans work without taking any breaks. Why do Koreans live such a hectic life? 64
30. Why do Koreans like using seals more than signatures in legal documents? 66

V. Transportation 69
31. Why do people sitting in a bus or on the subway hold bags for those without seats? 71
32. Why do people yield their seats to elders on a bus or train? 72
33. Why are Korean bus drivers so aggressive? Why don’t they follow the traffic rules? 73
34. Why are there so many black cars in Korea? 75

VI. Entertainment 79
35. Why do Koreans enjoy going to a noraebang after drinking? 81
36. Why do Korean films become so popular? 83
37. Why are Korean soap operas mostly about family issues? 85
38. Why do Koreans like to go to a jjimjilbang just to lie on the floor? 86

VIII. Rituals & Cultural Heritage 109
48. Why do Korean parents get so involved in choosing their children’s marital partners? 111
49. When Koreans get married they sell ham, but what exactly is it? 113
50. Why is a Korean wedding ceremony so short? 115
51. Why do Koreans change from a Western-style wedding dress into a traditional Korean dress during their wedding ceremonies? 116
52. Why do Korean brides and grooms wear Western clothes and take wedding pictures in a royal palace? 118
53. When Koreans marry they say they will serve the noodle for the guests, but in fact, it is hard to find noodles in the wedding. Why does this happen? 121
54. Why do Koreans put food, alcohol and even cigarettes on their ancestors’ tombs and why do they perform a big bow, called jeol, in front of the tomb? 122
55. What is special about Korean funeral culture? 124
56. What is ondol? 127
57. Why is Hangeul highly praised around the world? 129
58. What is samullori? 130