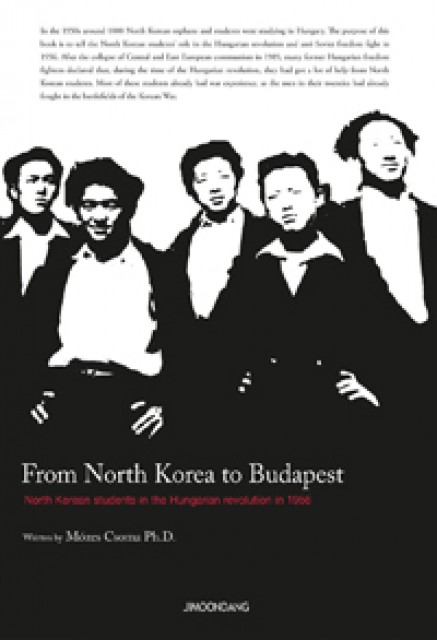 AUTHOR : Mozes Csoma
ISBN : 9788962971804
PUBLISHER : Jimoondang
PUBLICATION DATE : March 15 ,2016,
SPINE SIZE : 0.5 inches
PAGES : 187
SIZE : 5.10 * 8.9 inches
WEIGHT : 0.8 pounds
CATON QTY : 1
PRICE : $24.50
In the 1950s around 1000 North Korean orphans and students were studying in Hungary. The purpose of this book is to tell the North Korean students' role in the Hungarian revolution and anti Soviet freedom fight in 1956. After the collapse of Central and East European communism in 1989, many former Hungarian freedom fighters declared that, during the time of the Hungarian revolution, they had got a lot of help from North Korean students. Most of these students already had war experience, as the men in their twenties had already fought in the battlefields of the Korean War.

The author, Mozes Csoma is the chairperson of the Korean Department at Eotvos Lorand University (ELTE), Budapest, Hungary. He has published several books in Seoul and Budapest about the history of the Korea-Hungary relations. In 2015 he received an award from the South Korean Ministry of Culture in recognition of his contribution to promoting Korean culture in Hungary. Mozes Csoma also serves as a member of the editorial board of the South Korean journal Yoksa Kyoyuk (The Korean History Education Review).
INTRODUCTION

III. CHAPTER-DIVERGENCE
Attempts to escape from the other East European Countries
The later lives of the students who were repatriated from Hungary
Campaign to break up international marriages
Restriction of the movement of foreign diplomats in North Korea
Provocations against the embassies of the “fraternal countries”
The emergence of the modern “Hermit Kingdom”