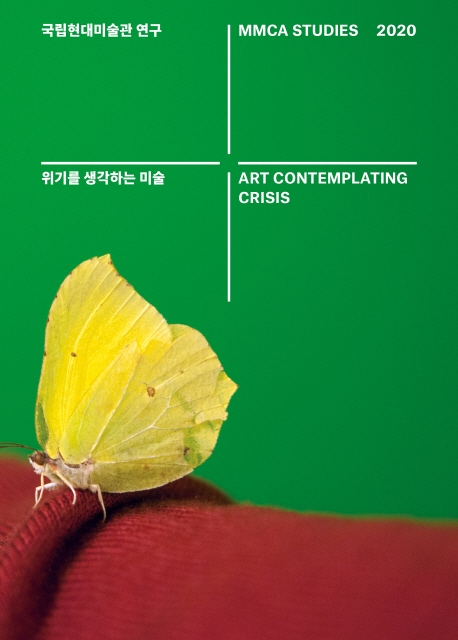 AUTHOR : Soojung Yi
ISBN : 9788963032597
PUBLISHER : National Museum of Modern and Contemporary Art Kor
PUBLICATION DATE : December 01 ,2020,
SPINE SIZE : 0.8 inches
PAGES : 270
SIZE : 7.5 * 10.3 inches
WEIGHT : 1.6 pounds
CATON QTY : 30
PRICE : $17.95
The COVID-19 pandemic is reawakening a common, globally interlinked human sense of crisis that had been all-but forgotten after the end of the Cold War. The 2020 installment of MMCA Studies focuses on art during a disaster, examining the accelerating changes and efforts that have taken place in the art world over the past year and exploring what art has been doing amid the crisis. Beyond ushering in changes in the ways in which works of art are produced and shown, the protracted pandemic is posing a truly diverse set of challenges, from the threat to the future of the museum’s physical spatiality to the diversification of digital experiences and the need for solidarity across the entire museum ecosystem.
This special issue of the journal, “Art Contemplating Crisis,” focuses initially on major forms of curatorial practice at MMCA in 2020. The first example of this, Unflattening, was an exhibition staged for the 70th anniversary of the Korean War. While infectious diseases and war represent different forms of disaster, this exhibition resonated with the current reality as an exploration of how art speaks out amid an immediate and viscerally perceived crisis. Yi Soojung, the curator of the exhibition, summons the different voices of artists who have represented war. The transformations that have been taking place within the Earth’s ecosystems and environment—of which the pandemic is but one symptom—are known to be closely associated with the issues of global warming and climate change.
MMCA’s A Museum for All, a Museum for Dogs, is a multidisciplinary project that shares active points of intersection with the Anthropocene theory. Sung Younghee, the curator of this exhibition, states how the theoretical grounding for the exhibition was the concept of the “Anthropocene-square.” The coexistence of human and non-human is also a major theme in the work of Eija-Liisa Ahtila, one of the participating artists in the international collection exhibition Axis of Horizon. Taking part in a discussion with the exhibition’s curator Yang Okkum, she discusses the need to re-establish the relationship between nature and humanity in order to overcome anthropocentrism. Lukas Brasiskis gives examples of films focusing on post-nature ecology—new approaches to visualizing the Anthropecene. Also, Cho Juhyun examines the significance and future role of art in the era of disaster by focusing Bruno Latour’s strategy of visualizing a model for simulating the future Earth and drawing minorities and “others” into the frame of art, which she views as an important approach to be pursued by “art after disaster.”
One of the many tragic aspects of the COVID-19 pandemic has been the constraints it has imposed on interpersonal contact, which has led to the coinage of the term “non-contact.” Seol Wonji explores how this concept can be applied in an exhibition at MMCA Cheongju—where “Open Storage” operates as an important aspect of the facilities. Patrick Flores offers examples of curatorial practice in Southeast Asia that have been underway or in which he himself has taken part amid the pandemic. Stressing that art does not merely respond to crisis, Flores instead describes it as showing how a crisis can be understood. He calls on art practitioners to subjectively contemplate, confront, and reconfigure the definition of “art” in order to subvert its very context.
The “Museum Studies” section shares MMCA’s key research achievements during 2020. Bae Wonjung introduces the museum’s first-ever exhibition on Korean Calligraphy offers an in-depth analysis of the history of Korean modern and contemporary calligraphy exhibitions. Kim Yejin traces the process of Park Rehyun’s development of a new form in her later works, as she combined Eastern-Style painting with the printmaking work that had been her previous focus. Sim Youngok, the researcher developed the museum’s new evaluation indices for museum education, describes the backdrop behind the evaluation indices’ development in terms of the advancement of MMCA’s education program. MMCA is also preparing for changes to its Gwacheon branch, which celebrates its 40th anniversary in 2026. Architect Hwang Doojin calls for respect and preservation of MMCA Gwacheon’s value in cultural heritage terms, sharing a concept that involves transforming its use in organic ways while retaining its existing architectural form.
The different authors each adopt their own perspective on the efforts made by art amid disaster and they show that art can serve as a means of dialogue and sincere reflection on the current crisis, bringing about small but crucial changes within our lives.