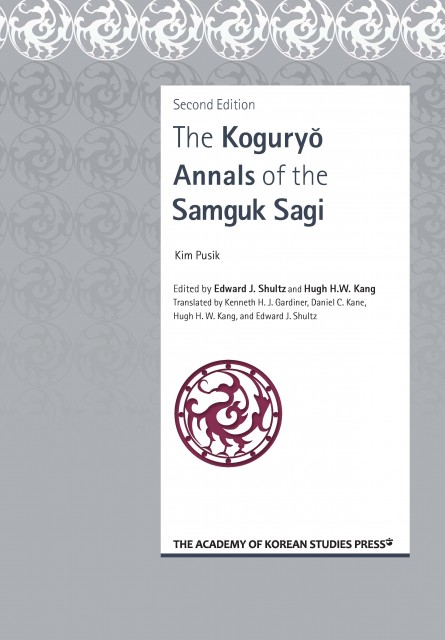 The Koguryo Annals of the Samguk Sagi

AUTHOR : Edward J Shultz , Hugh H.W Kang
ISBN : 9788971057919
PUBLISHER : The Academy of Korean Studies Press
PUBLICATION DATE : August 01 ,2012,
SPINE SIZE : 0.9 inches
PAGES : 301
SIZE : 6.2 * 9.1 inches
WEIGHT : 1.5 pounds
CATON QTY : 20
PRICE : $51.80
Samguk Sagi (History of the Three Kingdoms) is a history book of 50 volumes of which Bongi, or Main Texts, is regarded as particularly important because it contains records of main historical events arranged in a chronological order including the myths around the foundation, rise and fall of the three early Korean kingdoms, Goguryeo, Baekje and Silla, and the succession of their rulers. The book was compiled by a Goryeo scholar-statesman Kim Bu-sik in 1154, and is regarded as one of the most important source material for the study of the ancient Korean history. As Korea’s earliest remaining history book compiled under the patronage of the state, the book had set a good example for the history books that followed it. The Main Texts consist of the history of Silla from 57 BCE to 936, which is the longest and most complex part of the book, Goguryeo from 37 BCE to 668, and Baekje 18 BCE to 660, which is the shortest of the three texts. Translation of the Samguk Sagi into English, or in fact any foreign language, has long been regarded as a daunting work because translator(s) would require systematic knowledge of Korean history and culture in addition to expert command of English, Korean and Chinese. That is why we are so pleased to see the publication of The Koguryŏ Annals of the Samguk Sagi following the translation by Professor Edward J. Shult in The University of Hawaii who is widely admired as a specialist in the ancient Korean history. He expects the book to give readers “a closer, clearer look at the history of Goguryeo that played a key role in the historical development of Korea.”

Edward J. Shultz is currently Dean of the School of Pacific and Asian Studies at the University of Hawaii at Manoa. He is also a professor of Asian Studies and in charge of international programs at the University of Hawaii at Manoa. Professor Shultz received his AB at Union College in New York and his MA and PhD from the University of Hawaii. His first introduction to Asia came through serving as a Peace Corps Volunteer to Korea. As a graduate student he was an East-West Center grantee as well as a Fulbright pre-doctoral scholar. He has lived in both Korea and Japan for extended times, and has also traveled in China. He has experienced international exchange as a student, a professor and an administrator. Prof. Shultz’s major focus of research is Koryŏ history with a special interest in social, institutional, and political history. He takes great interest in all things Koryŏ, and Korean history in general and is the former director of the Center for Korean Studies. His recent publications include Generals and Scholars in Medieval Korea, Honolulu: University of Hawaii Press, 2000.

Glossary of Titles and Offices
Weights and Measures
Bibliography