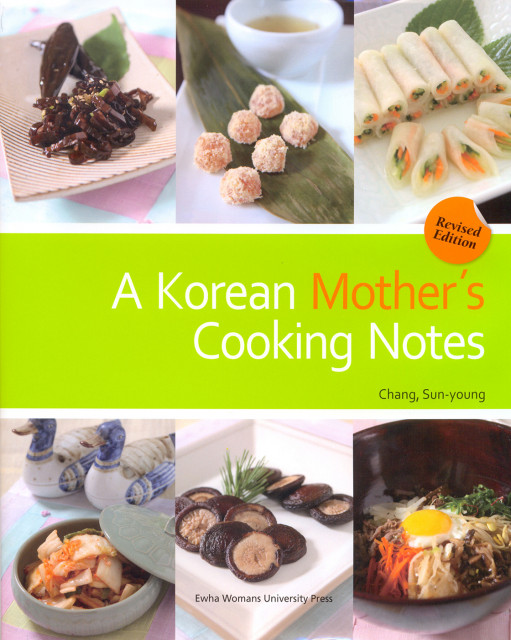 AUTHOR : Sun-young Chang , Soo-jin Cho
ISBN : 9788973008278
PUBLISHER : Ewha Womans University Press
PUBLICATION DATE : May 30 ,2009,
SPINE SIZE : 0.8 inches
PAGES : 280
SIZE : 7.7 * 9.5 inches
WEIGHT : 2.3 pounds
CATON QTY : 25
PRICE : $47.95
The revised edition of A Korean Mother's Cooking Notes is being published. A Korean Mother's Cooking Notes has been one of the representative Korean cookbooks, and has continually been enjoyed by all the generations of Koreans since its original publication in 1997. The revised edition selectively chooses 126 well-being Korean recipes and introduces them with step-by-step instructions along with full-color pictures.
The revised edition is organized into 9 basic categories: rice and porridge, soup and stew, seasoned vegetable dishes, food boiled in sauce, broiled food, kimchi, picked food, popular dishes and desserts. The book also contains two types of recipes: authentic recipes such as kimchi or vegetables mixed with rice (bibim bap) for the traditionalists and quick and easy recipes such as rice with trumpet royal mushrooms (saesong-i beoseot bap) for those who are in a hurry yet still want a home-cooked meal. There are also detailed explanations of special holidays and occasions like Korean Thanksgiving Day and birthdays, along with suggested menus for the settings. Finally, the revised edition also contains a simple and organized explanation of the commonly used ingredients.
Chang, Sun-young always explains her recipes step by step as if she is besides you, and gives the specific measures of the ingredients in cups and spoons all the time so that no matter who makes the dish, it will result in the same taste as the dish that she herself makes. Even novice cooks can prepare authentic Korean food, which has five thousand years of tradition, and have it taste "just like mom used to make."
She is not originally trained as a professional chef; rather, she is a housewife who loves her family very much. This book originated as a collection of notes and recipes to help her two daughters-in-law who lived away from her. She shares her years of experience and wisdom, ranging from how to clean the ingredients to how to preserve the foods to how to efficiently prepare the foods.
A Korean Mother's Cooking Notes provides invaluable guidance to Korean home cooking and includes the secrets and wisdom from 40 years of experience of a devoted Korean housewife. This revised edition is a labor of love from the entire family. The older daughter-in-law helped with the preparation and presentation of the dishes for the pictures, and the younger daughter-in-law translated the book.
Even in the US, this book is consistently requested among the 2nd and 3rd generation Korean Americans. We hope that this book will be a guide to the Korean culinary arts for those who are genuinely interested in Korean culture and cooking.

Chang, Sun-young graduated from Ewha Womans University and worked at her alma mater for 10 years until her family moved to the United States. She and her husband subsequently lived in Indonesia and the Philippines before returning to Korea.
During her prolonged residence abroad away from her sons for their study, cooking became her favorite pastime. When she came back to Korea, she took professional lessons from the late Kang, In-hee, a master of Korean authentic cooking.
Chang wrote recipes of family favorites for her two daughters-in-law and amassed enough to produce a cook book.『A Korean Mother's Cooking Notes』 appeared in bookstores and became a runaway best seller. Its English translation also becomes steady seller. She had her own cooking show on cable TV, wrote a weekly column for a leading daily newspaper and published another cookbook Love Comes From the Dinner Table.
She currently lives in Fremont, California where she continues to share and expose the Korean culinary arts and culture. She continues to give cooking lessons and writes a weekly cooking column for the San Francisco edition of the JoongAang Daily newspaper.

Cho, Soo-jin studied at Ewha Womans University where she earned her undergraduate and graduate degrees. After marriage, she moved to US and continued her studies at the University of Illinois at Urbana-Champaign with her husband. Currently she is a lecturer at the Department of East Asian Language and Cultures at the University of California at Berkeley.