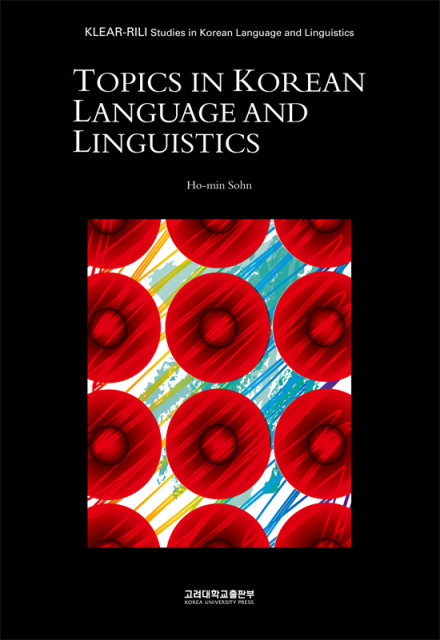 Topics in Korean Language and Linguistics

AUTHOR : Ho-min Sohn
ISBN : 9788976418326
PUBLISHER : Korea University Press
PUBLICATION DATE : October 31 ,2013,
SPINE SIZE : 1.8 inches
PAGES : 791
SIZE : 6.3 * 9.2 inches
WEIGHT : 3.1 pounds
CATON QTY : 8
PRICE : $68.95
This book is an anthology of selected papers on Korean language and linguistics that Ho-min Sohn, Professor of Korean linguistics and Director of the Korean Language Flagship Center at the University of Hawaii at Manoa (UHM) and President of the Korean Language Education and Research Center, Inc., have written for academic conferences, journals, and/or chapters in edited books during the past twenty odd years.

A total of thirty-four papers were selected to encompass topics on diverse aspects of Korean language and linguistics. These papers are topically classified into four major categories: (a) linguistic and pedagogical overview, (b) structural dynamism, (c) sociolinguistic and pragmatic issues, and (d) teaching Korean as a foreign language.

HO-MIN SOHN is Professor of Korean linguistics and Director of the Korean Language Flagship Center at the University of Hawaii at Manoa (UHM) and President of the Korean Language Education and Research Center, Inc. which has developed twenty Korean language textbooks.
He is a past chair of the Department of East Asian Languages and Literatures (1993-2000) and a past director of the Center for Korean Studies (2004-10) at UHM and a past president of both the International Circle of Korean Linguistics (1979-81) and of the American Association of Teachers of Korean (1994-7). His numerous publications include Korean Language in Culture and Society (2006), The Korean Language (1999), Korean: Descriptive Grammar (1994), Linguistic Expeditions (1986), Woleaian- English Dictionary (1976), Woleaian Reference Grammar (1975), and A Ulithian Grammar (1973).
Preface
List of Abbreviations
Table of Romanization Systems

PART I LINGUISTIC AND PEDAGOGICAL OVERVIEW

16. Korean in Culture and Society: An Introduction
17. Language Purification Movements in the Two Koreas
18. Orthographic Divergence in South and North Korea: Toward a Unified Spelling System
19. Korean in Contact with Chinese
20. Politeness Strategies in Korean
21. Honorific Patterns in Korean
22. Honorific Agreement in Korean
23. Politeness Formulas in L2 Acquisition: An Intercultural Perspective
24. Politeness as a Cause of Linguistic Change in Korean
25. Strategies of Indirection in Language