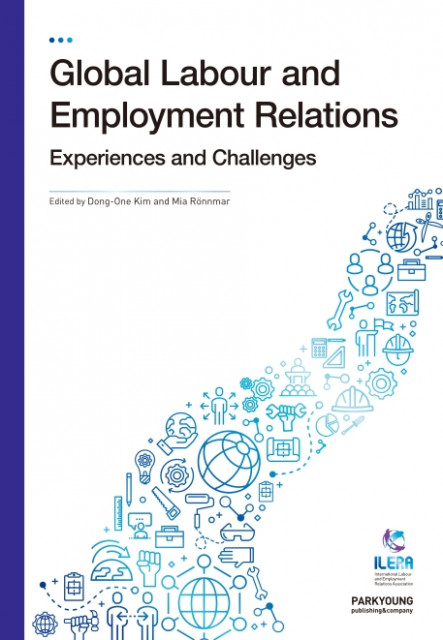 AUTHOR : Dong-One . Kim , . . .
ISBN : 9791130308791
PUBLISHER : PAKYOUNGSA
PUBLICATION DATE : March 06 ,2020,
SPINE SIZE : 0.8 inches
PAGES : 280
SIZE : 6.10 * 9.8 inches
WEIGHT : 1.6 pounds
CATON QTY : 14
PRICE : $46.45
This book contains a unique collection of chapters written by ten past-presidents of the International Labour and Employment Relations Association (ILERA). The initiator of the book is Professor Dong-One Kim, immediate past-president of ILERA. The celebration of the 50th anniversary of ILERA forms an important background to the book. Furthermore, the past-presidents presented and discussed their chapters during a special Anniversary Plenary Session at the 18th ILERA World Congress, hosted by Kim and held in Seoul in July 2018. The main theme of the World Congress was “Employment for a Sustainable Society: What is to be Done?”
The past-presidents, from different parts of the world, are all distinguished and leading researchers and experts in our field. Their work has not only contributed greatly to and inspired new scholarship, but it has also had important implications for policy and practice in the areas of employment relations, labour law and human resource management at national, regional and international levels.
In their chapters, the past-presidents reflect on the past, present and future of ILERA and the field of labour and employment relations, and highlight both potentials and challenges.
ILERA was founded in 1966 as the International Industrial Relations Association (IIRA). According to its Articles of Organization, its general purpose is to promote the study of labour and employment relations throughout the world, by such means as encouraging the establishment of national associations; facilitating the publication and spread of information about significant developments in research and education; and, organizing international and regional congresses.1 In 2009, the first female ILERA President, Professor Janice Bellace, took office, serving as an important pioneer and role model. After a long and inclusive process of dialogue, the association changed its name to ILERA in 2010. The name change reflects a recognition of the broadening of the scope of the association and the field of research to fully include, for example, developing countries; labour and all those who work (in paid employment, self-employment, informal work or the care economy etc.); and a multitude of different topical issues, such as the transnational movement of labour; non-standard work; labour market regulation; trade and labour standards; and discrimination in employment.2
From the very beginning, ILERA has collaborated closely and fruitfully with the International Labour Organization (ILO). The International Institute of Labour Studies was one of the founding institutions of ILERA. An ILO-official serves as the Secretary-General of ILERA, and the ILERA Secretariat is based at the ILO in Geneva and provides invaluable support to the association. In 2018, at the 18th World Congress in Seoul a new Memorandum of Understanding (MoU) between ILERA and the ILO was signed and celebrated. The MoU aims at enhancing collaboration between the parties in different ways.
The second section provides, by reasons of space, only a brief presentation of the authors and the content of their chapters, in the chronological order of their presidency. The third section presents some common themes and reflections on the future outlook.

Concluding Remarks and a Future Outlook
The past-presidents’ chapters offer rich and multifaceted perspectives on the development of ILERA and the field of labour and employment relations, as well as inspiring ideas on the future direction. One common theme is the need to creatively, critically and constructively engage with the profound change and transformation that affects both the world of work and labour markets and our field of research. Another common theme is a great commitment to ILERA and a belief in the association’s resilience, multitude and innovation.
In moving forward, we are able to build on ILERA’s traditions, strengths and dynamics, and in this context, I believe three aspects are worth highlighting, namely, societal challenges and policy development; internationalization and inclusion; and, interdisciplinary collaboration.
ILERA ? and research and higher education in the evolving field of labour and employment relations ? has a key role to play in addressing global societal challenges, such as sustainable development; employment and decent work; poverty and inequality; aging populations and intergenerational tension; technological change, digitalization and AI; migration, and, climate change. Here, ILERA benefits from its tradition of bringing together scholars, social partners, practitioners, governments and policy makers, and from its long-standing and close collaboration with the ILO.
ILERA is by nature and ideology global and international. Research, and the work and engagement of scholars, is guided by global academic values, such as academic freedom, openness, inclusion, transparency, collegiality and curiosity. It is important to continue to extend the global reach and relevance of ILERA, to welcome new members into our community and to further comparative perspectives.
It is also crucial, from the perspective of legitimacy and high quality, to promote gender equality and diversity within ILERA, at all levels and activities. Furthermore, along the lines of inclusion, ILERA can serve as a vital platform for exchange and collaboration between scholars at different stages of their careers, and assist in mentoring early career researchers and highlighting their contributions.
There is an increasing awareness, by universities, governments and international organizations, of the need for interdisciplinary research, both when it comes to making ground-breaking discoveries and to successfully addressing societal challenges. ILERA ? and the field of labour and employment relations ? is already one-step ahead, as it has always crossed disciplinary boundaries, and facilitated a multifaceted study of the world of work. ILERA ? and the world and regional congresses ? can contribute to dynamic innovation in theories, methodologies and data collection in our field, and further stimulate the exploration of intersections between the field of labour and employment relations and other disciplinary fields.
In conclusion, as the current President of ILERA I am happy, honored and humble to follow in the footsteps of these past-presidents, and to host the next, 19th, ILERA World Congress in Lund in Sweden, on June 21?24, 2021 on the theme of “Making and Breaking Boundaries in Work and Employment Relations.”

This is a provocative collection of chapters by a number of the former presidents of the International Labour and Employment Relations Association (ILERA). The essays discuss how the field of industrial relations is evolving and the implications for ILERA. The contributors are all leading scholars so their views carry deserved weight beyond that due from their ILERA administrative service.
It is striking how similar are the views of the former presidents even though they reside in a wide range of countries and their academic sub-fields differ across labour relations, economics, and the law. All the chapters note similar far-reaching changes in the nature of work, many induced by alterations in technology, such as the rise of computer-mediated “platform” work, and pressures from globalization, leading to an increasing importance of labour rights and global supply chains.
The former ILERA presidents urge academics to adjust their research to focus more extensively on those trends while maintaining allegiance to the perspective and values that originally motivated the field of industrial relations. To do that research will necessarily be multidisciplinary and make use of a variety of methodologies. The former presidents recognize that the coverage of collective bargaining and union representation has declined substantially, and continues to decline in nearly all countries. Nonetheless, the field of industrial relations continues to provide important insights into the changing nature of work including how those changers affect workers and the workers’ responses. The continuing relevance of industrial relation springs from the fact that conflict at the workplace and higher levels has not abetted and in fact, there are signs of the spread of new forms of collective representation including affinity groups and wildcat protests.
There is a common trend toward income inequality across developed and developing economies. And while there is room for debate regarding the degree to which union decline has contributed to that inequality, there is wide recognition of contention at workplace and broader social levels regarding the distribution of economic progress and the extent of employee voice in economic decisions. On these issues and so many others, the former ILERA presidents demonstrate that industrial relations has much to say.

04 Challenges and Opportunities Facing ILERA and Our Field 64
_Thomas A. Kochan
Building on ILERA’s Legacy 65
Workers: Who are We? 66
From Labour-market Dualism to Fissurization of Employment 67
The Future of Work 69
Globalization 71
Worker Voice, Social Dialogue, and Bargaining Power 73
Rethinking Management Roles and Norms 74
Toward a New Social Contract 76
Shaping the Future of Work 78

05 Employment for a Sustainable Society: What is to be Done? 81
_Tiziano Treu
Changing Protective Labour Legislation: Simplifications and Flexibility 85

10 ILERA and the Future of Work: Challenges and Opportunities in the Quest for Universal Decent Work and Social Solidarity 223
_Evance Kalula
Introduction 223
Some Reflections 225
Conclusion 230

11 Conclusion: Exploring Strategies for Labour and Employment Relations as an Academic Field 235
_Dong-One Kim
Introduction 235
What We have Done: Trend Analyses of LER Research, 1947?2014 236
Dimensions of Academic Disciplines and LER 239
Three Strategies for the Revitalization of Academic Disciplines and Underlying Assumptions 241
The Case of LER: The Analyses of Strategic Options and Relevant Assumptions 245
Conclusion: Do We Really Want to Be Twenty-first Century Luddites? 251