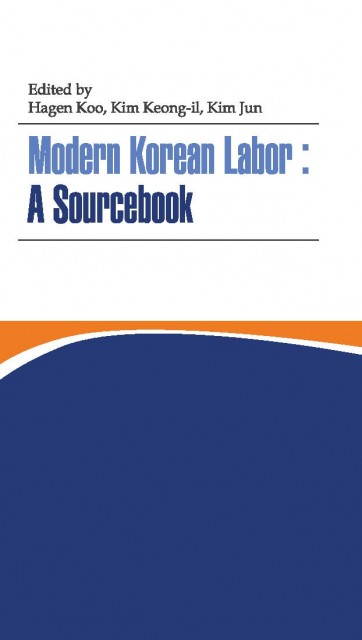 AUTHOR : Hagen Koo , Keong-il Kim
ISBN : 9791158660406
PUBLISHER : The Academy of Korean Studies Press
PUBLICATION DATE : November 01 ,2015,
SPINE SIZE : 0.7 inches
PAGES : 278
SIZE : 5.8 * 9.8 inches
WEIGHT : 1.2 pounds
CATON QTY : 20
PRICE : $37.00
The series “A Sourcebook” organizes and provides primary data sorted by subjects and areas on the understanding of and research into modern Korean society and culture in an attempt to meet academic interest on the foreign study of Korea in its rapid achievements of industrialization, democratization, and social change.

This book is a compilation of data sources on the subject of Korean labor, which were originally written in Korean but have been translated into English. The purpose of the book is to provide essential data sources for researchers and students inside and outside of Korea who are interested in Korea’s labor history, labor politics, and culture. The book consists of seven chapters, covering the following seven periods: (1) 1920–1945 (Japanese Colonialism); (2) 1945–1950 (post-Liberation); (3) 1950s (the Korean War and post-war restoration); (4) 1960s (initial economic development); (5) 1970s (industrialization and the emergence of the democratic labor movement); (6) 1980s (democratization and intensifying labor struggles); and (7) 1990s (neoliberalism and the labor crisis). Each period is characterized by its unique labor policies, organizations, labor conflicts, and workers’ culture, and these themes have been used as subchapters to organize the referenced sources in an orderly fashion within each chapter.

Hagen Koo is Professor of Sociology at the University of Hawaii at Manoa.

Kim Keong-il is Professor of Sociology at the Academy of Korean Studies.
Chapter1 Labor during the Japanese Colonial Era: 1920–1945

Chapter3 Labor during the Korean War and the Post-War Restoration Period: 1950s

Chapter6 Democratization and the Labor Movement: The 1980s

Chapter7 The Ascent of Neoliberalism and the Labor Crisis: The 1990s