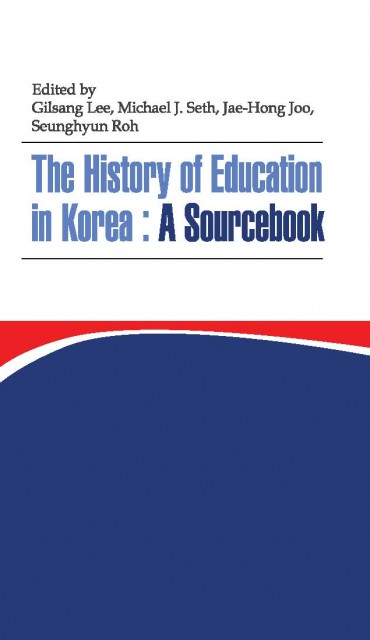 The History of Education in Korea: A Sourcebook

AUTHOR : Gilsang Lee
ISBN : 9791158660581
PUBLISHER : The Academy of Korean Studies Press
PUBLICATION DATE : November 01 ,2015,
SPINE SIZE : 0.8 inches
PAGES : 320
SIZE : 5.8 * 9.8 inches
WEIGHT : 1.4 pounds
CATON QTY : 20
PRICE : $37.00
The series “A Sourcebook” organizes and provides primary data sorted by subjects and areas on the understanding of and research into modern Korean society and culture in an attempt to meet academic interest on the foreign study of Korea in its rapid achievements of industrialization, democratization, and social change.

Gilsang Lee is Professor of Education at the Academy of Korean Studies. Michael J. Seth is Professor of History at the James Madison University.
Part1 Education under the United States of America Military Government in Korea (USAMGIK) from 1945–1948

Part2 The Launch of a New Government, the Korean War, and the Rehabilitation of Education (1948–1960)

Part4 Reform Policies and the Democratization Movement in Education

Part5 Era of Globalization and Neo-Liberalism