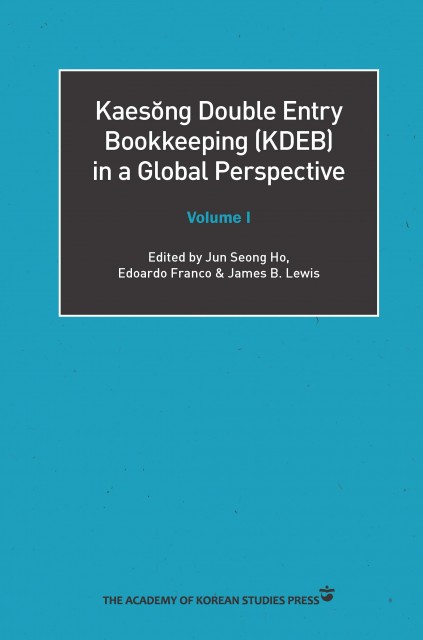 AUTHOR : Seong Ho Jun , James B. Lewis
ISBN : 9791158661137
PUBLISHER : The Academy of Korean Studies Press
PUBLICATION DATE : June 20 ,2016,
SPINE SIZE : 0.7 inches
PAGES : 292
SIZE : 6.2 * 9.5 inches
WEIGHT : 1.3 pounds
CATON QTY : 24
PRICE : $37.00
These two volumes represent a great contribution for a better understanding of the development of double-entry bookkeeping as a traditional accounting method used in East Asia. The chapters that follow compare the perspectives of scholars from South Korea, China, Japan, and Europe who argue that the economic history of East Asia can contribute to unveiling an aspect of modernity focusing on their use of double-entry bookkeeping, so far neglected by mainstream scholars.

The Federal Accountant Australia in 1917 remained epilogues "Who first thought of bookkeeping as a business method? One would never think of Korea, and yet it was there that Double-Entry Bookkeeping (DEB) was invented and put into use. This was in the twelfth century, while it was not until the fifteenth century that a similar system was devised in Venice, then the commercial centre of the world. Kaesŏng Double Entry Bookkeeping(KDEB) in a Global Perspective brings new insight to one of the debatable questions of global history: Why did globally developed DEB, despite surprising divergence between the West advanced areas and the East?

Part II. CHINA
The Sanjiaozhang as a type of Double-Entry Bookkeeping and a Discussion of the Historical Contribution of Sagae Songdo Ch’ibubŏup
Accounting Techniques in China: A Brief Discussion of a Long History

Part III. JAPAN
The Style of Japanese Bookkeeping in the Edo Period (I)
A Consideration of Accounting Terms Used in Early Modern Japan in Relation to Korea
Research on Chōihōin the Edo and Early Meiji Periods (I): The Accounting Practices of “San’in Chōi”