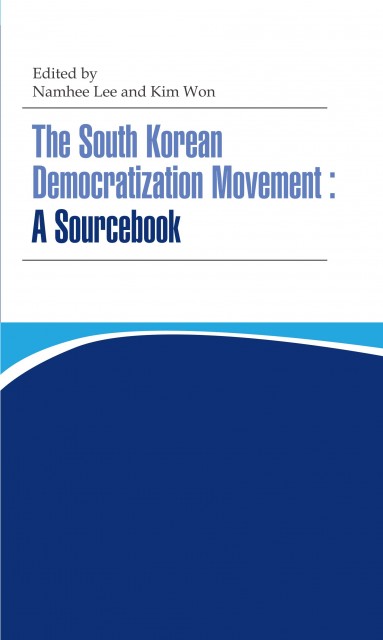 AUTHOR : Namhee Lee , Won Kim
ISBN : 9791158661168
PUBLISHER : The Academy of Korean Studies Press
PUBLICATION DATE : July 30 ,2016,
SPINE SIZE : 0.9 inches
PAGES : 374
SIZE : 5.8 * 9.8 inches
WEIGHT : 1.6 pounds
CATON QTY : 19
PRICE : $37.00
With the publication of The South Korean Democratization Movement: A Sourcebook, readers of English can now access in a single volume the rich and compelling voices of the people in South Korea who dedicated their lives to the democratization movement. Many have served prison terms, and some even perished in the process. Spanning more than three decades from the early 1960s to the late 1980s, the democratization movement was responsible for toppling the country’s authoritarian regime and ushering in a parliamentary democracy in 1987. The movement also produced an impressive array of documents and sources, which include manifestos that were read out loud before a demonstration; newsletters printed and circulated underground; pamphlets scattered on university campuses or on streets for a few seconds before a protest leader was apprehended and forcibly taken to a police station; statements of appeal to judges, which were smuggled out of prison and transcribed and circulated underground; letters written to family members while in prison; and poems, among other writings. Of the thousands of these kinds of documents, 55 have been selected and translated for the Sourcebook, almost all of which are available in English for the first time.
The Sourcebook editors have tried to represent the multiple perspectives and diverse narratives of the entire movement, not only the more well-known cases—such as the April Student Uprising of 1960, the May Gwangju Uprising of 1980, and the June Uprising of 1987—but also less-well-known but equally vibrant and long-lasting movements. These include the ongoing struggles of farmers, the urban-poor, women, Catholics and Protestants, journalists, writers, and teachers. An introduction prefaces a set of primary documents in each of the 23 chapters, providing historical, political, and cultural frames of reference to allow readers to construct the settings within which the movements took place and the relevant issues involved, and brief biographical sketches of the authors. A chronology of the democratization movement from 1960 to 1987, recommended readings, and a glossary of specialized terms and expressions are also appended.
The most comprehensive set of primary texts from the South Korean movement published in English to date, The South Korean Democratization Movement: A Sourcebook will be an essential reference for anyone interested in South Korean history and culture in general, and the democratization movement in particular. It will be the standard supplementary text for courses related to South Korea as well as an indispensable primary source for anyone doing research on South Korean politics and culture.

Associate Professor of Modern Korean History in the Department of Asian Languages and Cultures at the University of California, Los Angeles.

Part II The Democratization Movement after the May 16 Military Coup d’Etat (1961–972)
Chapter 4 The Movement to Oppose the Korea-Japan Talks, and the Constitutional Amendment for a Third Presidential Term
Chapter 5 The Emergence of Statist Education and Opposition to Campus Military Training
Chapter 6 Urbanization and the Emergence of Social Problems

Part III The Democratization Movement during the Yusin Regime (1972–979)
Chapter 7 Intellectuals and the Democratization Movement
Chapter 8 The Nationwide Federation of Democratic Students and Youth (Mincheonghangnyeon) and the People’s Revolutionary Party (Inhyeokdang) Incidents
Chapter 9 The Anti-Yusin Movement of the Press and Church
Chapter 10 The Death of Kim Sang-jin and the Movement to Restore Democracy
Chapter 11 The New Village Movement and the Farmers’ Movement
Chapter 12 The Charter of National Education and Movements for Educational Change
Chapter 13 YH Women Workers’ Sit-in in the Headquarters of the New Democratic Party, the Busan-Masan Uprisings, and the Collapse of the Yusin System

Part V The Democratization Movement before the June Uprising of 1987
Chapter 16 Campus Liberalization Policy and the Student Movement
Chapter 17 The Emergence of Anti-Americanism
Chapter 18 The Radicalization of Social Movements and the May 3 Incheon Rally
Chapter 19 The Development of the Constitutional Amendment Movement
Chapter 20 The Movements of Farmers, Educators, and Ordinary Citizens