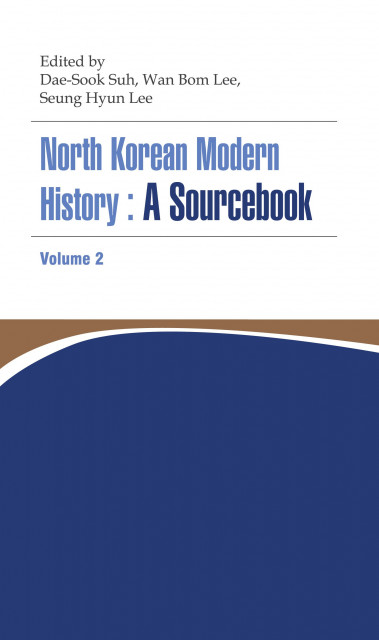 AUTHOR : Dae-Sook Suh , Wan Bom Lee
ISBN : 9791158663599
PUBLISHER : The Academy of Korean Studies Press
PUBLICATION DATE : March 20 ,2018,
SPINE SIZE : 1.1 inches
PAGES : 588
SIZE : 5.8 * 9.8 inches
WEIGHT : 1.8 pounds
CATON QTY : 20
PRICE : $37.00
This source book on North Korean Modern History is published in English to help scholars to research on North Korea. In most cases even the most basic documents relating to North Korea’s history are available only in the Korean language. North Korean authorities occasionally issue English versions of selected documents, but these translations are markedly inferior in quality—some are in atrocious English.
The purpose of this book is to collect and present basic documents and improve our understanding of North Korea’s political and social traditions. This is not an effort to either praise or denigrate North Korea’s accomplishments or failures. it is an introduction of the basic documents that will assist our analysis and understanding of the country.
Translating the North Korean documents into proper English was a more challenging task than the translations into Japanese and acceptable Korean. Therefore, in order to keep this study to a manageable length, the English version is limited to the compilation of the most essential and basic documents.
It is a study on the basic documents of North Korea, and it is hoped that this collection of source materials will be useful to scholars and officials studying or dealing with North Korea.

Faculty: Professor of Political Science at University of Hawaii