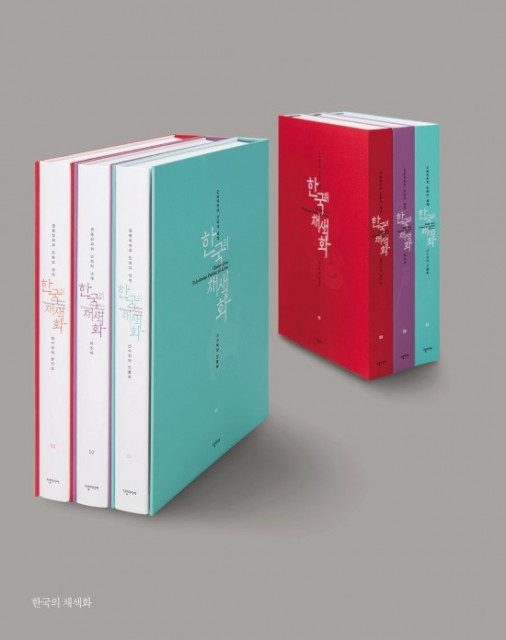 Chaeseakhwa are the paintings which most effectively portray the emotions and tastes typical of Koreans, and they are made up of stories which exude the deep feelings characteristic of Korea. There is a distinctly modern sensibility in Korea’s chaesaekhwa, with the freedom of imagination so central to modern painting, and signs of the modification of deformation visible here and there, they throw open the fascinating world of Korean abstraction. In this way, coming and going freely between the past and contemporary times, chaeseakhwa represent an unrivalled formative world which has ensured their place in the hearts of art lovers across the globe.

2. An international project with the participation of specialists in Korea and
overseas

With planning and management led by Chung Byungmo, Professor at Gyeongju University, the editorial committee for this project was made up of specialists from Korea, namely, Youn Bummo, Professor at Gachon University; Yoon Yulsoo, Director of Gahoe Folk Art Museum; and Lee Wonbok, Director of Gyeonggi Provincial Museum. The editorial committee also included key international specialists, Pierre Cambon, Chief Curator at Musée National des Arts Asiatiques Guimet; Kumja Paik Kim, Curator Emerita of Korean Art at the Asian Art Museum of San Francisco; and Bo Songnian, Professor at the China Central Academy of Fine Arts. Research essays were written by Yi Songmi, Professor Emerita of Art History at The Academy of Korean Studies; Kishi Fumikazu, Professor at Doshisha University, Japan; and Joanne Kim, Professor at Dartmouth College, USA. Recommendations were kindly given by Hiroshi Mizuo, director of the Japan Folk Crafts Museum, who was on the editing committee for the 1975 volume on Korean minhwa, Minga of the Lee Dynasty; and Youngsook Pak, Professor Emerita at SOAS, KF Distinguished Visiting Professor at Yale University and The GC CUNY. In addition, nineteen scholars from Korea and overseas contributed to drafting the explanations of the artworks presented.

3. An overarching master collection including works exhibited overseas as well as
in Korea

There has been immense international interest in Korean royal court paintings and minhwa from as early as the late nineteenth century, with artworks being collected by major museums, galleries, and private art lovers. Included in Chaesaekhwa, Polychrome Painting of Korea are masterpieces of Korean chaesaekhwa, many of which have been newly uncovered in foreign collections spread around the world: in Newark Museum, LACMA, Asian Art Museum of San Francisco, PEM, Brooklyn Museum, and Philadelphia Museum of Art in the USA; in the Japan Folk Crafts Museum, Kurashiki Museum of Folk-Craft, Serizawa Keisuke Art and Craft Museum, and Koryo Museum in Japan; in the Guimet Museum of Asian Art in France; and in the Victoria & Albert Museum in the United Kingdom.

4. The highest-resolution images, presented with beautiful design and binding,
convey the full wonder of the original artworks

Amid the growing international interest in and far-reaching popularity of royal court paintings and minhwa, Chaesaekhwa, Polychrome Painting of Korea seeks to share a field of Korean art brimming with potential and which is firmly positioned at the center of Korean art history and as an aspect of traditional Korean culture well-loved by people around the world. In these volumes, the finest masterpieces of royal court painting and minhwa, along with many artworks that have been newly discovered in collections in Korea and overseas, have been carefully selected and reproduced in the highest definition with beautiful binding and design. The images have been presented as large as possible to give readers a true feeling for the original works; the charming details and delicate recreation of tones present a wondrous world that will surely leave a lasting impression.

.
Chaesaekhwa, Polychrome paintings of Korea (No.1)


Chaesaekhwa, Polychrome paintings of Korea (No.2)


Chaesaekhwa, Polychrome paintings of Korea (No.3)

foreword
On Preparing the Publication of Chaesaekhwa, Polychrome Painting of Korea