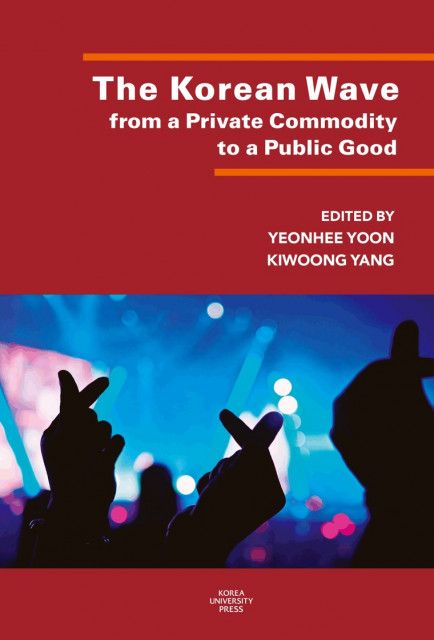 The Korean Wave from a Private Commodity to a Public Good

AUTHOR : Yeonhee Yoon , Kiwoong Yang
ISBN : 9791190205221
PUBLISHER : Korea University Press
PUBLICATION DATE : February 01 ,2020,
SPINE SIZE : 0.6 inches
PAGES : 204
SIZE : 5.10 * 8.8 inches
WEIGHT : 0.9 pounds
CATON QTY : 14
PRICE : $37.95
The title of this book, The Korean Wave: from a Private Commodity to a Public Good, refers to the idea that the Korean Wave has now crossed its nation’s borders and become an international public good. Because the Korean Wave has so far surpassed its national borders to become a subject of global attention, we consider the Korean Wave through the lenses of power, interest, identity, politicization, and the “anti-Korean wave”.

“In this context, we are proud to have supported the work that has led to this publication. We congratulate the editors on promoting a unique interdisciplinary perspective on popular culture and international relations, featuring contributions by both humanists and social scientists, and focusing on a hugely significant transcultural phenomenon – the Korean Wave – that originated in Asia yet spread across the globe. The questions of identity, interest, and power raised by this publication, based on a series of conferences held on our campus, are as significant as they are innovative. I hope you, the reader, will be inspired by this collection to pursue your own inquiries and further develop the study of Korean culture in a global context.”
— Michel Hockx, Director of Liu Institute for Asia and Asian Studies, University of Notre Dame

Yeonhee Yoon is a professor of the practice of the Korean Language and Culture at the Department of East Asian Languages and Cultures and faculty fellow at the Liu Institute of Asia and Asian Studies at the University of Notre Dame. She received her Ph.D. in Korean Linguistics from the University of Hawai’i at Manoa. Her research interests include Intercultural Pragmatics, Second Language Acquisition, and Korean popular culture. Her current project focuses on Korean History and Culture through Film, Korean Popular Culture and migration, Korean Language and Culture for International Negotiations and Diplomacy, and Korean language for academic purpose. Her recent publication include “Korean Hedges in Spoken Discourse” (2016) and “Korean Society” in Essentials of Korean Culture (2013).

Kiwoong Yang received his Ph.D. from the University of Tokyo in Japan. He is a 2015-16 academic year visiting fellow at Notre Dame’s Liu Institute for Asia and Asian Studies, is a tenured professor in the department of politics and public administration and a dean of the Graduate School of Global Cooperation at Hallym University, South Korea where he specializes in international relations among China, Japan, Korea, and the United States. He also serves a guest scholar for the academic year at Notre Dame’s Kellogg Institute for International Studies as well as taught a course titled Conflict and Cooperation in International Relations of East Asia for the fall 2015 semester and is currently teaching China, Japan, and Korea- The Impossible, Indispensible for the Spring 2016 semester. He is the author of numerous articles and books, including “South Korea and Japan’s frictions over history” Asian Perspective (2008) (written in English), Diplomacy and Negotiations in East Asia (2013) (written in Korean). While in residence at the Liu Institute, his research examines the escalation and negotiation of conflict in international relations of East Asia including such issues as the North Korea problem, historical conflicts and maritime territorial disputes among South Korea, China, and Japan.
Foreword … 7
Michel Hockx (University of Notre Dame)

Part 1: K-Pop as a Gateway to Korea

Part 2: Identity-dimension of the Korean Wave

Part 3: Interest-dimension of the Korean Wave

Part 4: Power-dimension of the Korean Wave

Part 5: A Rivalry with the Korean Wave

Appendix: Trends of the Korean Wave

The Korean Wave in the World Seen through Statistics   167
Kiwoong Yang, Kyungeun Lee and Jeounghwa An (Hallym University)